Cher and Country: It’s Only Natural
Links of 60s History 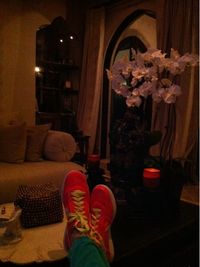 The pics in this post are from Cher's tweets. For instance, Cher takes a picture of her feet. Who hasn't done that??? That's my favorite one!

There are many cool developments in Cher-tweet-land...Cher's eye view pictures being the best. It's like...could you do a tweet an autobiography?

Some ask, "Is it really Cher tweeting?" It doesn't seem too foolish to believe that she is. The tweets are honest, peppery, emotional and even occasionally humanly mundane...and contain a quality of vagueness beyond what an assistant or publicist would contribute.

That said, when folks criticize her spelling and grammar--it's ludicrous. Seriously, Twitter is the land of C U Ltr. It seems these people are just poking Cher with a stick is what that is all about.

Which is why when Cher asks: "If people don't like me then why not just stay away & follow who They Love?" and "I must b very naïve cause I still don’t understand why people who don’t like me come here? Seems mean 4 no reason"  My opinion: they come to get a rise out of Cher…which they are more likely to get with something negative than something positive. 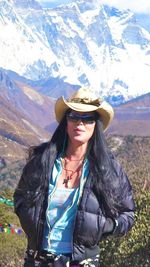 Cher in Nepal: Last night John made me watch a National Geographic show about Big Foot in Nepal.

So anyway, I’m behind with the Cher tweets…does that make me a bad fan? Make no mistake, I love the tweets. Cher is very generous with her tweet time.

I’m 35 text pages behind!!!  Cher has been a tweet'n fool too. And pouring over them feels like trying to uncover mysteries in biblical texts.

In any case, there is no need for Cher to defend her tweets with dyslexia. ("Dyslexia SORE spot 4 me! School was hell! Said I was lazy.” Mar 23) Even if she wasn't dyslexic, she can freakin tweet any way she wants.

Anyway, back to September of last year: Cher is loving on Lady Gaga’s VMA dress and she was just getting her tootsies squished into Grauman’s Chinese Theater ("the impossible dream of a tiny 4 yr old come True!" and "the first time ever someone got to throw glitter all over it." Nov 18). Again, Cher laments “I feel my Best Pictures are behind me” which boggles the mind. I feel like we’ve been hearing this since Believe and there have been amazing amazing pictures since then, The Vanity Fair pics are really beautiful. Stand right up there with anything from the 70s or 80s. 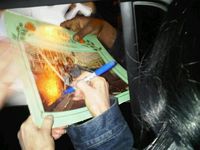 I love this picture...an near-Cher-view of a fan getting his All I Ever Need Is You (1972) album signed in New York City (posted Nov 11). I love that album. I really do.

You haven’t seen the last of me is now in Cher's top 5 songs she's done. Oct 23...says Burlesque isn’t Shakespeare and is predictable but is beautiful and fun. Indeed.

Says Zimmerman is writing for teen Disney show, Shake it Up and Cher was sad when she lost half a years worth of texts between her and Rz...“I’m desolate! They were precious 2 me” (Mar 14) This reminds me of the heartache of losing creative and personal work from computer crashes. Technology has a sucky side. Which is why I'm wary of using document scanners for important docs. A fire seems less likely than a computer crash.

Cher thanked her fans for the last night in her three-year Vegas run: “packed audience on their feet for nearly the whole show! They screamed and yelled with excitement and delight" Feb 8

Cher now has a YouTube station: http://www.youtube.com/cher but there's not much on it yet

Cher often expresses concern for friends in surgery or sick. She expressed honest disappointment about the Oscars shunning for Best Song, “Would u like Some Cheese 2 go with that WHINE!” Jan 26  (her own "Snap out of it!")

She raises the interesting identity question: "Why would someone pretend to be me. It’s meaningless 4 them. Instead of making them feel more…it must make them feel less” Nov 6 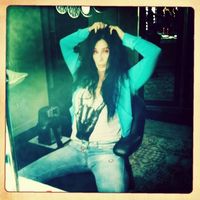 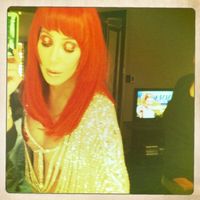 "Who or What is Cher Lloyd" Mar 15 (Cher Lloyd is who clogs up my Cher google searches, that’s who!)…this comment causes drama to ensue from Cher Lloyd's minions: "I guess I live in a cave. No Disrespect meant !" The next day she apologizes for not knowing tweet etiquette (who does?) "give me a fn break here…There’s rm 4 both she has more followers cool! There truly is lots a rm! It’s a Big planet!"

Which is nice of Cher to say...but...honestly...can we be honest here in the 5th decade?...the planet does not have room for most celebrities, which is why they fade away predictably within months, years or a decade at most. Cher takes up a lot of planet room….nothing against thousands of other celebs who didn’t make it 5 decades…it’s just…you know...the odds are not good for Cher Lloyd. I could be wrong. Let’s touch base in 20 years. If I’m wrong. I’ll eat my hat.

People are asking questions (I'm so jealous!) but we only get to see the answer and I am forced to guess at the questions:

"long blk straight, But I try to make it wavy. Only works in Maui" Mar 15 (Is your hair straight or wavy?)

"Neon Pink on toes Metallic rose glitter on fingers Not deep or meaningful, it's just what I'm Doing right now" Mar 15 (What nail polish do you wear?) 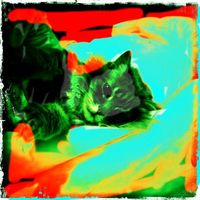 "loved my dog Kuma ! Akita ! It's cool people Love their pets ! He's Gone, but what a Prince he Was. Strange, writing this i got tears"
Mar 16

On Kathy Griffin: "Let’s talk Kathy! I love her. Took her to Maui with G & bunch a my best friends 4 years! Only KG and RZ make me laugh uncontrollably! She is very kind, dresses up when not working. Me, I live in Chrome’s sweatpants." Mar 16

This reminds me. I just finished a Mark Twain biography, a 600-page opus by Ron Powers. Did you know Mark Twain wrote with a bunch of ampersands in his correspondence & he would probably tweet that way too.) 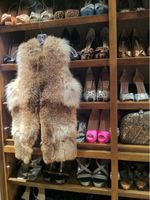 "In bed watching tcm! Not tired but gotta get up early’n work out. Been cleaning out my closet 4 what seems like half my adult life" Mar 17

"Hi Lovely's! Ran across my orig S&C Fur vest ! Will take pic tonite & post ! Am in closet will take pics !"

Look at all those shoes!

She solicits opinions about playing Mother superior to an orphanage on The Three Stooges movie (I’m agnostic) mar 18 "I want 2 do more films! …something 2 sink my teeth in! completely different! Unexpected! Cher put a sock in it."

Cher: explore your inner villain! Cher Scholar put a sock in it.

"No Been Cher ALL MY LIFE! Only Cherilyn when in trouble!" Mar 24 (Were you ever called Cherilyn?)

"With Meryl saved girl from getting rapped by HUGE MAN between little Italy china town midnight" (No way!)

She almost had car accident after Chaz’s bday party on Mar 20: "yah but party was tonite ! Many people were away on 4th" (Why was Chaz's bday party on the 20th?)

Says she is "ipad/phone possessed. Artist I love So! Has song 4 me & maybe she & I duet! Oh happy Day lovelies" mar 21

"Wash every other nite! Unless needed don’t user dyer! Put is swirly big bun and let it dry that way" (How do you wash your hair?)

Finally we have questions included around March 26! 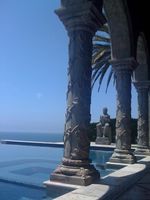 Cher's pool with a Buddha statue.

Zimmerman turns out is a "big fan horror film I’m not! He put on Rene Zelweger scary ass film! I’m scared go down stairs 4 ice cream. Ok he’s going down 4 the ice cream, but I may never go Downstairs in the Dark AGAIN! Hate horror! I’m big sissy! What kind of ice cream? Chocolate??? If it’s not choc. It’s not Desert." Mar 28

"Oh! Arg! Monday! I became a singer so I could work Nites! Not really! Son said “Sing Cher” So I Did! But thank God it was Nites" Mar 28

Like all of us, Cher is curious about the latest antics of Charlie Sheen’s personal tour. Apr 3

"would you ever duet with merle haggard? Seriously? Oh God yes ! Love him It might not b lovelies fav but great" apr 3 (This should happen.)

"I’m very dyslexic! Imagine what a success I might have made of my life if only my grammar was perfect…Might have been able to have true connection with people! Make them feel something! (sounds like Sonny liner notes from 1973) Oh well quel damage" mar 22

"Nothing would be better than kicking the bucket on stage." Jan 27

Don’t say that! Cher freaks do NOT like to think of "Cher mortality." I can only imagine what Liz Taylor fans are going through right now. And if Entertainment Weekly puts Cher on the back and
Arnold Schwarzenegger's poopey face on the front when Cher “kicks it” I will lose my mind.

By the way, there are many Liz pics on the set of the movie Giant in EW's Taylor tribute this week, that set really being in Martha, Texas, the major plot setting forCome Back to the Five and Dime, Jimmy Dean.

Things Cher likes that you might want to check out: It seems unlike her to be doing all this tweeting. Kinda strange. I love LARS AND THE REAL GIRL too! Have the DVD. Ryan Gosling is SO sweet.