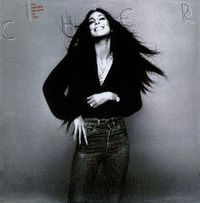 Cher’s Warner Bros albums have now completely missed two levels of music technology: cassette tapes and CDs. We’re now on to mp3s downloaded from iTunes and these four albums STILL are buried under a rock like a time capsule we buried back in 1978 and now can’t find. What the hell?

This awesome Cher scholar Joe Marchese reviews the gems of Cher's late-70s Warner Bros time period and daydreams about the absolutely necessary compilation that is missing from our lives.

How can Cher be taken seriously as 5-decades-long musical artist when some of her best tracks are hijacked in a closet under hundreds of pairs of shoes?

I love his line-up but would one-up the thing after reading about Neil Young’s Blu-Ray DVD set Archives. This is the kind of package Cher fans need, a really serious musical retrospective of her career.  Young's set includes three cornerstone live concerts, rare footage and his entire catalog. Sure it’s $300 but what Neil Young scholar wouldn’t eat it up.

Speaking of Warner Bros tracks, Cher scholar Tom found the original version of "Island" on iTunes, recorded by Chunky, Novi and Ernie. Some Cher fans speculated that the song's writer Illene Rappaport was a psudonymn for Cher but this isn’t true. Ileen is her own self (although her name is Lauren Wood) and was alledgedly thrilled Cher recorded her song.

OH MARY HOW COULD YOU?? Of course all those Warner Brothers releases were available on CASSETTE!!!! (As well as 8-Track)

Damn, I should known better indeed and I should have checked with you on that point! Honestly, i thought cassettes came out in 1979-1980??

OH they are GORGEOUS! STARS however did not come in a jewel case - it came in one of those plastic slip case envelope things - very weird. Have never seen it any other way. Gotta get out my digital camera and photo those gems!

Someone needs to probe a TWEET out of Cher explaining why her 70s WB albums aren't on CD.