I believe Cher scholar Robrt sent me this rarity of Cher singing "Wooden Heart" circa 1965.

Also, in the latest Entertainment Weekly (4.1.11) there is a on-page piece on shocking David Letterman Show moments (page 8) of which Cher’s 1986 "asshole" episode is included among other weird weird episodes like Madonna’s f-word opus, Joaquin Phoenix’s sham performance, Farrah Fawcet's ramblings, Drew Barrymore’s boob flashing, and Crispin Glover (who knows what that was about). The representative pic for Cher shows her arms folded defensively. But she loosened up later in the interview as these shots show.

Luckily Cher had a change of heart about Letterman and has had many memorable visits since. 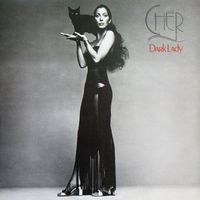 The track was Cher's third solo chart-topper. She scored a number-one hit with 1971's "Gypsys, Tramps & Thieves" and repeated the feat with 1973's "Half-Breed." Cher would not return to the number-one spot for a quarter century, finally breaking her drought in 1999, when "Believe" topped the Hot 100.

Written by Ventures keyboardist Johnny Durrell, "Dark Lady" was the title track of Cher's 1974 album, which featured two other Durrell compositions, "Dixie Girl" and "I Saw a Man and He Danced with His Wife." The LP also included "Train of Thought" and "Rescue Me."

"Dark Lady" reached number one by knocking off "Seasons in the Sun" by Terry Jacks. After a one-week run, it was replaced by John Denver's "Sunshine On My Shoulders."

Wow…sandwiched between "Seasons in the Sun" (we had joy we had fun….this song was a

n  earworm) and the drippy "Sunshine on My Shoulders" (I hugely prefer "Take Me Home, Country Roads" and "Thank God I’m a Country Boy" for my John Denver dollar).

Young heavy metal aficionados must have been pulling their hair out. God bless em.