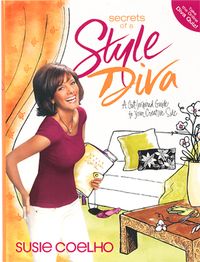 My friend Coolia picked up this Susie Coehlo book Style Diva as a remainder and sent it to me. So you see, I am such an obnoxious Cher fan, my friends know the names of Sonny’s other wives.

Anyway,  I never wanted to like Coelho to be honest. I mean, it was one thing Cher getting remarried to the redneck (that's honestly what we thought) but Sonny getting remarried was most upsetting. Remember the People Magazine article about the wedding…wasn't Sonny in a full, wilderness beard and the officiant mispronounced Susie’s name Cherie? Sonny was supposed to pine for Cher forever. And then Susie popped up in Sonny's Melrose restaurant publicity…I just didn’t like it. I never watched her gardening show on HGTV. And I was prepared to not like this book.

But…she won me over. And not just because of all the name dropping of Sonny and Cher. (Who’s gonna clean up all these names!?) Even though I have only a mild interest in home decor, the book went beyond that and the tips could easily be extrapolated to real smart life lessons: especially the end of the "Keep Creating" section with life tips that explore the ideas of putting aside perfection,  how your failure help you to succeed, the 24-hour holding pattern of not over-reacting to initial impressions, and my favorite tips about learning to relax when things get overwhelming and why you should embrace chaos. It was really a fine mentoring kind of book. AND it had a few surprising Cher and Sonny tales.

From "How the Style Diva Got Her Groove On"

One Memorial Day weekend, my roommate and I decided to take off for Palm Springs for a getaway. That weekend, I met my first husband, Sonny Bono—an event that changed my life. I was taken by his tenacity, his sense of humor and-–believe it or not—his sense of style. He had fantastic taste in just about everything, including homes. His house in Palm Springs was filled with Indian fabrics and organic textures. Just the kinds of things I grew up with. The house was small and quaint and I felt right at home...Our Bel Air home was another story. It was a grand Italian villa. I’ll never forget the first day I drove up to the house. Everything was on a huge scale—big gates, long driveway, high ceilings, and enormous rooms. It was almost empty except for the bedroom and breakfast room. It was a huge decorating challenge. Luckily we had a famous decorator on board. I was excited, but also a little overwhelmed….when he finally did the installations, he sent us out of town. When we came back four days later the entire house was done all the way down to the smallest detail….(I can related to the joy that homeowners feel with my television team and I swoop in to remake their backyard in one day.) I'll never forget the impact that it had on my life…

While I loved our homes, I also spent lots of time with realtors looking at other properties just to see what was out there and to get inspired. So while other people went to the beach on the weekend, we would go house shopping even when we had no immediate intention of moving…We sold the Bel Air home to purchase the rustic four-acre property just up from the Beverly Hills Hotel …You thought perhaps the “Surprise Gardener” had a formal degree in landscaping? Nope, I learned the hard way—by doing my own backyard!...

I was shooting a TV movie in Hawaii when I got a call. “Guess what? We’re in the restaurant business.” Sonny had always dreamed of opening a little mom-and-pop Italian restaurant where he could serve his famous Steak Bono, a classic family recipe.  Dreams often come and go with most people but not with him …We had to choose a direction for the style of the restaurant before we could even begin constructions..We knew we wanted a relaxed, fun and inviting atmosphere…inspired by my memories, I chose a Mediterranean palette featuring a burnt orange, dusty sage and a cream combination …for the wait staff I designed long aprons in the same burnt orange. I also used bromeliads as our flowers to give the room an exotic feel but I put them in small low vases to keep the style casual.

You have to understand that neither Sonny or I had a clue about the restaurant business. Yet we dove in headfirst, talked to those with more experience, used the information we gathered and trusted our instincts. Wolfgang Puck was already having great success with Italian nouvelle cuisine in his famous Spago Restaurant which was just up the street. He...supported our mission.

“Sonny had been a huge inspiration to me and I remember very fondly my nine years with him. But the time had come for me to find myself and create my own life outside of his world.”

From "Believe in yourself"

One of the best examples of this I have ever seen was my former husband Sonny Bono. He never learned to play the piano—or any other instrument for that matter—and some say he could barely sing. But he refused to let that stand in his way.  He would get an inspiration in the middle of the night, so he would go down to the piano and bang out a song with the only five chords he knew...Sonny believed in himself when no one else did. That is one of the greatest lessons I learned from him. He would make a decision then jump in. If he didn’t know how to swim, he'd figure it out along the way. Sonny believed in himself so powerfully that he eventually became a congressman of the United States—and mind you, he didn’t even have a high school diploma.

I’ve met some pretty daring trendsetters in my life, but I think the trophy has to go to Cher. I learned a lot watching her. She was family…like a sister-in-law. Cher is a trendsetter, always looking to be unique, to find something different and to push the envelope. Whether she and Sonny were wearing bobcat vests or she was showing her navel on national television, she has always lived her life on her own terms, regardless of what anyone else might think. She’ll dress is some wild outfit by Bob Mackie at the Academy Awards if she feels like it or star in an off-beat movie (for which she then wins an Academy Award, of course).

And by pursing this ongoing creative approach to life, she has stood out, been successful, and been the one to set many a trend. She doesn’t let people deter her from her vision, and she is not afraid to follow her instincts. If anything, she actively looks to be different from everyone else—which is why she has such a distinctive sense fo style...

A great example of Cher’s approach to life and her ability to set trends is the time she bought a plot of land in a rustic part of Benedict Canyon in Los Angeles…this was by no means prime real estate. The property was pretty run down and dilapidated, the kind of dusty, arid spot that always seems to attract rattlesnakes and tumbleweeds…Cher had a vision: She was going to transform this bare lot into a spectacular Egyptian mausoleum…I think a few of the neighbors thought she was nuts, but Sonny and I knew better. There are no rules in Cher’s book.

Years later [it] became a magnificent estate with grand gates and spectacular drive. It was a huge, two-story  house with exceedingly high ceilings. All the lines were very clean on the outside, yet the inside was filled with lots of softer exotic elements and wonderful textures. I especially loved the wonderful array of nubby, fuzzy and textured fabrics and materials used…That arid, rattlesnake-laden section of Benedict Canyon in now one of the most exclusive neighborhoods in Los Angeles. Of course, Cher has moved on to a new creative endeavor. You can’t keep a Diva down.

The mention of Steak Bono reminds me that we need a book of Sonny's family recipes. I propose something as follows: 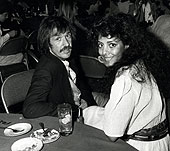