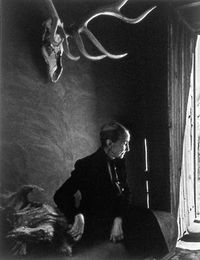 To the left is my favorite photo taken of Georgia O'Keefe now on exhibit at the Santa Fe Georgia O'Keefe exhibit "O'Keefiana." It was taken by Yosef Karsh. I love the way her hands are positioned touching the wood, the light coming in through the door, the textures on the wall and (you can barely see it in this copy) but the texture of the dirt on the ground.

Last weekend Mr. Cher Scholar and I celebrated Valentine's Day at the Abiqu Inn in Abiqu, New Mexico (a town famous for where Georgia O'Keefe settled to paint the stunning rock formations of the Chama Valley, the Catholic Penitente Morada there and the Genizaro Indians who settled there). John and I keep returning to the area, first attracted to it by my cousin's camping/cabin/fishing recommendations and our wanting to learn more about the subject of John's employer here, The Georgia O'Keefe Museum. While we were staying at the inn, I picked up a book of poems written about O'Keefe by her friend and sometime-librarian C.S. Merril.

O’Keefe dressed in black suit
silver flower “OK” Calder pin
white scarf at her neck
hair in french roll at the back
felt like riding to the ranch
to get warm things
velvet hood,
quilted Chinese coat, gloves
kleenexes for watering eyes
talking about a critic
who said she was influenced
by Thoreau and Emerson.
“I’m supposed to have read
Thoreau as a child.
I don’t remember that.
I don’t remember anything
about him.
I have found
When something is written
which is untrue,
it is best
not to comment
because that only
draws attention to it.
Otherwise it disappears
And fewer people
notice it.”

From O’Keefe, Days in a Life by C.S. Merril