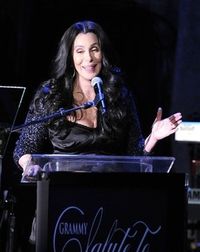 Cher attended the Pre-Grammy Gala last week to give David Geffen an Icon Award in a somewhat surly manner.

In honor of Geffen, Mary J. Blige sang a spirited version of A Free Man in Paris (Joni Mitchell wrote the song about Geffen). Cher presented the Icon Award to Geffen, her longtime friend and ex-boyfriend. She told the audience she had been instructed to speak from the heart.

"I would rather stick needles in my eyes than speak from the heart to a bunch of strangers," she said before sharing poignant and amusing details of their history together.

"He has a very soft heart," Cher said. "He's always the smartest man in the room. He falls asleep at the beginning of every movie we've ever seen. I have no idea what this (bleeping) award is. Whatever it is, I'm sure he deserves it."

The Recording Academy-event was also dedicated to David Geffen, who was given the academy’s

President’s Merit award. The co-founder of Dreamworks is also a legendary and influential music figure and played a pivotal role in the careers of acts ranging from Joni Mitchell to Nirvana.

Longtime friend Cher, dressed in a sequined mini-dress, paid tribute to Geffen in a touching yet irreverent speech:

“When David asked me to do this I just wanted to kill myself, but you can’t say no to him,” she joked.