I've been avoiding reviewing a stack of Cher compilations, both old and new, that I've been picking up new on Amazon and at Amoeba Records in Los Angeles. May as well get it over with. 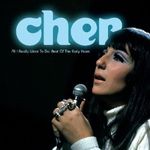 cher: all I really want to do: best of the early years
Microwerks, 2009

First, awkward cover photo. Both this one and the inside photo show off her gargantuan rings of the time. This is a modest solo compilation, not the most comprehensive or unique selection, not remastered, has the major hits ("All I Really Want to Do," "Bang Bang,"  "Mama," "You Better Sit Down Kids") and the almost hits or not-really-hits-by-cher ("Where Do You Go," "Alfie," "Needles & Pins"). The fillers are common compilation selections ("Behind the Door," "Hey Joe") and not-so-common ones ("Elusive Butterfly," "I Go to Sleep," "Don’t Think Twice," The Click Song"). Thankfully the packaging is somewhat green. Bill Dahl did the liner notes:

“a beloved entertainment icon for so long we can barely remember a time when Cher wasn’t basking in superstardom.”

But these liner notes taught me that "Behind the Door" was penned by Graham Gouldman, later of the band 10cc. They wrote these 70s tunes: remember "I’m Not in Love" (Big boys don't cry) and "The Things We do for Love" (like walkin in the rain and the snow when there's no where to go and you're feelin' like a part of you is dyin').

"You Better Sit Down Kids unfolded from the male perspective…Cher’s legion of followers weren’t disturbed by the gender jumble, sudden tempo switches and jazzy sax interjections” 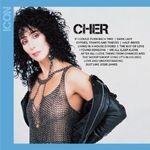 The cover is a Herb Ritts chain mail photo…and that's all the photos you get, no liner notes, just a cheap series cash-in from Geffen.

Common of these Geffen releases, there's no "Believe," just "If I Could Turn Back Time" (without the parenthetical title), "I Found Someone," "After All," jumping back to "Half Breed," "Gypsies, Tramps and Thieves" (spelled right and yet wrong), back forward to "We All Sleep Alone," back to "Dark Lady," forward to "Just Like Jesse James," back to "The Way of Love," up to "Love and Understanding," back to "Living in a House Divided," back up to "The Shoop Shoop Song." This thing gave me whiplash. For no good reason. 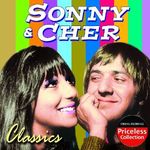 The artwork really annoys me in that it’s clearly a 60s compilation but it uses one 60s pic and two S&C 70s pics (inside) which says to me the person putting this together has no idea about the timeline of Sonny & Cher. This greatly perturbs me. It’s historically inaccurate. Scholars hate shit like this.

Also, here is a compilation without "I Got You Babe" which makes it one people are most unlikely to buy. The hit in the mix is "Baby Don’t Go;" nonhits are "Living for You," "500 Miles" (which I've always liked), "Let it be Me, "Unchained Melody," "Then He Kissed Me," "You’ve Really Got a Hold on Me" (tunes are heavily taken from the Look at Us album).

John and I listened to this one when we were heading up through the Chama Valley in New Mexico. I said "Unchained Melody" has always sounded to me like she’s singing from another room. And then there's that awkward splice at the end. Caesar and Cleo's "Love Is Strange" is also included as are Sonny’s "Laugh at Me" and "The Revolution Kind." We both agreed we liked "You’ve Really Got a Hold on Me" and I promised someday to play for him Cher and Gregg Allman’s version.

While in the car listening to these I was trying to explain to John how these reissues come to be, who picks the songs, what is the defining principle? Without liner notes you can’t usually tell. Hell, sometimes with liner notes you can’t tell either. My theory of creation is pure random sloppiness: seven monkeys in a room picking out song titles from a hat.

The one-page CD sleeve for this one has a very ugly advertisement for www.oldies.com on the back. The cover is very fugly and loud too. I hate this thing. It is trash polluting our universe. 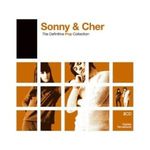 First of all this is a far cry from "definitive" although there are 2 CDs. On this one, I do like the cover art. Very mod. The thing is needlessly overpackaged but I do appreciate the Good-Times-era living room photo inside with Sonny pouring Cher tea. I don’t appreciate the 70s pic in the back of the booklet. No 70s songs, no 70s pics. Cher Scholar law.

Sheryl Farber’s liner notes have been reused from The Essentials: Sonny & Cher and are a good historical review on Sonny’s early efforts in the music business and meeting Cher as “a teen runaway…with dark, mysterious eyes and world-wise alto.”

“The (Phil) Spector presence is so strong on the fisrt S&C cuts…it’s as if the soundboard knobs used to record were still greasy from Spector’s corned-beef sandwich.”

Interestingly, Farber claims the song “Just You” is perilously close to The Ronettes' “Baby I Love You.” And she talks about early evidence of Sonny's politics in his lyrics:

“While the couple’s outsiderness was referred to in many of their songs, the future Republican Congressman Bono managed to keep that image in check by making sure the public knew they weren’t real radicals, but genuine patriots, in 1965’s The Revolution Kind.”

These 30 tracks havebeen digitally remastered and include the big duets: "IGUB," "Baby Don’t Go," "What Now My Love," "The Beat Goes On," and Cher hits: "All I Really Want to Do," "Bang Bang," "You Better Sit Down Kids." Side one is otherwise filler from Look At Us and Sonny’s Inner Views ("Laugh at Me," "The Revolution Kind") and the b-side "Have I Stayed Too Long," ending with filler from The Wonderous World of Sonny &Cher. Side two is filler from In Case You’re In Love with non-album singles "A Beautiful Story," "Plastic Man," "Good Combinations" and "Inner Views ("My Best Friend’s Girl Is Outa Sight") and two songs from Good Times ("It's the Little Things," "Don't Talk to Strangers").

Again…randomness.  My husband (who likes many Sonny songs) gafawed during Sonny’s French hamming in "Sing C’est La Vie." I told him I liked "Why Don’t The Let Us Fall In Love" (a favorite from childhood) and he was appalled when I told him "It’s Gonna Rain" almost beat out "IGUB" as the first Sonny & Cher single in 1965. It sounds so dated and lyrically inferior to "IGUB."  John likes "The Beat Goes On" and "Bang Bang" (who doesn’t) although he didn’t get the gypsy interlude in the western saga. We both snickered through the lyrics of "Monday" but I came to a new appreciation for Sonny's music and lyrics for the song "Cheryl’s Going Home." "Plastic Man" and "My Best Friends’s Girl is Outa Sight" (I don’t get the ending…did his friend get married or was the girl available at the end?) are both painful to sit through. John loves "It’s the Little Things" as do I.

"Good Combination" is manic, as John said many of Sonny’s arrangements were. I said, didn’t you know Sonny was a big proponent of the 60s movement called Speed Saxing? He said, "Really?"

And with a straight face I said, "Oh Yeah."

These compilations will never end; and they already feel dated without Cher’s latest hit from Burlesque: "You Haven’t Seen the Last of Me."

"She even ate a Hershey bar to make her kisses sweeter" (snicker snicker).