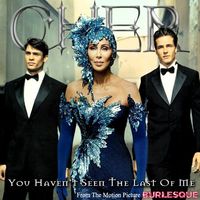 Let me start by saying the soundtrack Burlesque made its Billboard debut at #18 this week. Not too shabby. Not at all. But I have to admit, I was more excited over the clip Cher scholar "Dishy" sent me last week of Cher singing a Christmas version of "One Tin Soldier" from the early 70s.

That's because this is primarily a Christina Aquilera CD. With the exception of Cher's two tracks, this is Aquilera's Yentl. More a star-vehicle than a musical.

Entertainment Weekly liked Christina's tracks on this CD better than her earlier "misfire" Bionic. But they accuse Cher's of warbling and never again mention her tracks at all.

I had heard an early bootleg of Aquilera's track #9 "Show Me How You Burlesque" but it was titled "Spotlight" when I heard it. I thought it was a decent track but kind of emotionless and I was curious to see what kind of range the soundtrack would have.

The CD does have a bit of variety, comprised of a few Etta James inspired performances that Christina Aqulera yells through, alternating with camp, groove, and the musical pillars of the movie--dance tracks about burlesque ("Express", "Show Me How You Burlesque" and "The Beautiful People"), which are catchy but all kind of sound alike after awhile.

I think Aquilera has a powerful voice and I have always liked her song choices and overall articstic message. But I don't feel like these songs are the best of her best. I played the CD about three times in the first few days before seeing the movie and my husband John popped his head in to ask what all the yelling was about.

There's a lot of yelling.

But the truly stand out track is Aquilera's torch ballad "Bound To You" (the song to download according to Entertainment Weekly). In a way it's the only emotive moment in the soundtrack.

Then there are two Cher songs, which is the only reason I now own this CD.

"Welcome to Burlesque" - the lyrics to the chorus (according to Cher on David Letterman) were written by Moonstruck screenwriter John Patrick Shanley who did a polish on the Burlesque script. I like the sort of gypsy-sounding violin parts that wind around in the song, but the rest of the instrumentals behind Cher are plodding and mushy and it never quite takes off for some reason. Like the music drags it down and makes it sleepier than it should be. Cher might have been better served singing a copella.

"You Haven't Seen the Last of Me" -- I was initially highly disappointed to hear Diane Warren was penning this. Her contributions to the Cher canon are not favorites as you may know. And her style is so bombastically unique that her song stands out like a toe among the Aquilera songs.

Which brings us to the point of mentioning how uneven the music to this "musical" is, how seemingly  haphazardly the songs were slapped together. Even though I'm not a Warren-fan, it would have been much better if either she or Aquilera had written an actual full score to the movie for musical consistency.

All that said, this Warren song has gotten into my head like an earworm and stayed there. So maybe I like it more than I want to admit. Again, the music behind Cher on this track sounds murky and plodding, too. Which is why the bootleg remixes have been such infectious fun: http://www.youtube.com/user/InfoVectra#p/u/2/sri9f90JwS4