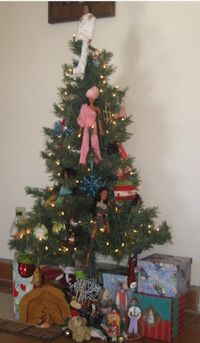 It's been a very crazy month and I've been lagging with my blogging. But Cher Scholar is exhausted. We got back from Cancun early in the month and then went right into Thanksgiving prep. My mother-in-law Donna came for the long weekend (and I love it that she was so  enthusiastic about seeing Burlesque Thanksgiving-eve with me and John. See our collective review for more about that.) Unfortunately, in between launching the big dinner with new recipes and juggling a huge work ramp-up to a Cartagena Colombia meeting, I've been wiped out, in pain and feeling a bit deflated from all the work.

One pre-Thanksgiving task I looked forward to was putting up  Christmas decorations, which (like cooking Thanksgiving dinner instead of grabbing take-out at Dinahs) I hadn't done for two years. And this means hoisting up the Cher Christmas tree!

However, I was initially thwarted in this most pleasant task because two mice had been living in our garage. John freaked out and spent $50 on every kind of imaginable mouse trap to place on every conceivable mouse path in our garage, leaving the leftover un-opened traps sitting right on my boxes of Cher crap.

Sure I could have moved them out of the way. As if that were that easy! I was afraid of them! What if

one accidentally fired off or had a dead mouse decaying in its clutches. I couldn't even look at them. Before our trip to Cancun I had asked John to move the traps and he, thinking I was being a big baby (guilty as charged), was in no hurry to do it. I kept expressing how important it was for me to get to my Cher junk so I could assemble the glorious Cher tree. On a layover from our fight back from Cancun I started again to worry about the traps and having to lose a finger trying to get to my Cher dolls.

This was around the time I was overspending on Burlesque memorabilia and it sort of seemed like he had set Cher traps as an intervention! So I confronted him right there in the airport

(after finishing the Vanity Fair magazine article)...why you gotta be puttin out Cher traps on me?

He mocked some outrage and said it was all untrue and ridiculous that I would accuse him of such a thing. Then he said it was a moot point because he already picked up the Cher traps!

Ah HA! He admitted it! They were Cher traps!!

Can you believe it?

Anyway, the Cher traps were indeed gone when we got home and I was able to assemble the Cher tree.

Thank God for tender mercies! A few new things about the Cher tree: 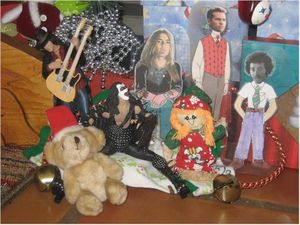 Posted at 12:37 PM in Night of the Living Cher Doll, What This Really Says About Me | Permalink | Comments (3)

A Chermas tree! Brilliant.
I have used a Cher doll as the tree topper, and regularly send out Chermas cards, but never a whole tree. Most impressed!

Fabulous! The Sonny angel is truly inspired. I bet those cher traps will reappear in your nightmares.

Mary it is really adorable I wanted to suggest one of the Jonas Brothers Dolls for the Rob Camiletti figure. Also a nice touch for Gregg Allman would be a new liver in a box since he got a liver transplant this year!

Mary Christmas to you!