The Burlesque Movie Review
Cher Interviews! Can You Get Enough? 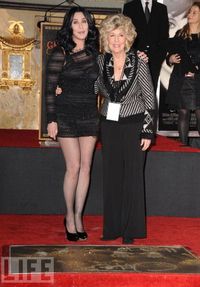 I was reminded of Georgia Holt recently. I've been working on a novel about my Grandparents' old adobe house in a little town called Roy, New Mexico. Researching the town, one of their claims to fame is Bob Wills of Bob Wills & The Texas Playboys. From the Roy website:

"Bob Wills wrote the song "San Antonio Rose" while a resident here in 1927. Bob worked as a barber during the day in Roy and played with a dance band at night. He wrote a song called "Spanish Two-Step" which fit the style of dancing most popular here, and this song later became the famous "San Antonio Rose"."

Bob Wills, Bob Wills. Where have I heard of Bob Wills and The Playboys? Oh yeah, Cher's mom played with them!

I started singing with Bob Wills and his Texas Playboys when I was about 10. He`s the one that told my Dad to take me to Hollywood because, he said, "She`s got the greatest voice; you`re just wasting it back here."

There's a lot to Georgia's story, as I've said before. And I had never even heard the tale about her father trying to kill her.

It reminds me that most Cher biographers have missed the larger Cher story that is her family history, both sides – Armenian genocide on her Father's branch of the family tree and the Arkansas mother's family on the other side, not only the large hard-scrabble dramas that happened before Cher was even born, but growing up in that intersection of families. I think a real worthwhile Cher biography needs to be something like Katharine Hepburn by Barbara Leming. She spent half the book tracing the lives of Hepburn’s parents and grandparents to show what a force of nature was building to create Katharine the Great, not just the real heroes in her family (of which there were a few, including her own mother) but the tragic figures and suicides as well. It’s just the full arc of someone’s life story. Life coaching tells us, like it or not, we are the product of our early childhood, which was itself created by our family legacy. Even the bad shit makes us who we uniquely are. Aside from Randy Taborelli’s attempts, most biographies have treated Cher like a singular vortex of fame, starting with when she met Sonny and sketchy information before that. Watching old episodes of Merv Griffin with Georgeanne and Georgia interacting with her tells us much more about who Cher is: being teased as a sister, kavetching as a daughter and looking back as a granddaughter.

Honestly, the sister angle alone could probably fill a book.

i get the 'feeling' that
cher was like me growing up:
the one every one else laughed at and gave a hard time too.....

even, though, everyone KNEW
there was 'something' unspoken and dismissed about "US" that was dangerous and unpredictable
AND,
that 'just like 'our
own-selves' could not put a
finger on or a name tooo.