Cher Interviews! Can You Get Enough?

The great thing about Burlesque press is seeing how friendly Cher has become again. In TV interviews over the past years Cher has seemed tense and stern. It's fun to see her smiling again.

The Movie Phone interview between Cher and Christina was fun:

An essay on Cher's appeal as a gay icon:

This was one of my favorite interviews, maybe because I could relate to Kelly's giddiness or because they asked really fun questions and got Cher talking about life at home. 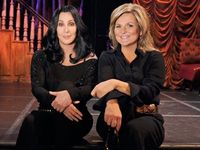 The annoying Cynthia McFadden interviews. Yes, she annoys me…maybe through no fault of her own. She reminds me of an annoying woman I work with. But on some level I also think she reminds me of an annoying archetype, not quite smug, but smuggy. And I really do hate the big interview chopped up over three shows. Cheap, cheap, cheap. And you had to watch all three...because none of them aired the same soundbites.

Whew! A lot of tidbits to slog through, no?

according to all the sales-
people at CEASARS'
i annoy:

there should be a 2 dvd-set
and live cd released-
just like they did for
celine and elton...
google or wekipedia even
said this way back when...

IN THE MEAN TIME:
if you go to ioffer.com
you can get 2 different versions of the OCT 2010
concert for $35.