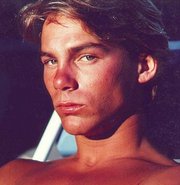 My husband had never seen The Goonies until last night. Believe it or not.

I don’t even know how to begin to explain this. He’s practically my age and this was THE kiddie-version of Indiana Jones for my age set. I’ve seen The Goonies about 50 times on cable. How can you not have seen it? And once you're hooked in, it's a rainy-day-addictive flick.

I had always planned to Netflix it for my better half; but when I found out Burlesque-director Steve Antin was in it, I popped that sucker right up to the top of my Netflix que, ahead of Bull Durham, which my husband has also never seen. What the...??

In The Goonies, Antin playes the preppy a-hole fighting the poor, nerdy kids (or goonies). He's a richie-ditchie whose father owns the country club and is threatening to ruin the goonie's lives by building a golf course where their shabby homes sit with quaint ocean views. It reminds one of Draco Malfoy backing up his evil father, Lucius, in Harry Potter.

Antin's most memorable scene is when he finds out the hunky Josh Brolin (son of Amityville-dad and Barbra-Streisand-husband James Brolin) has turned his potential girlfriend into a Goonie. He screams “Aaaaandy” down a well. He’s a very convincing "jerk-alert."

He was also a memorable rapist in The Accused and more importantly Jessie in Rick Springfield’s video for the song “Jessie’s Girl.” He was a very cute preppie-looking teen and I’m sure he broke many hearts when he came out. 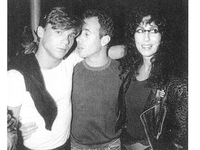 He was also David Geffen's boyfriend for about a year and this allegedly helped him (with Geffen's prodding of Cher) to win her as his co-lead in Burlesque.

"Jessie’s Girl" reminds me of Rick Springfield's prime back in the late 70s. I was in grade school and it was the first record album my fellow students took to in the 5th and 6th grade. It was probably their first album ever…meanwhile I had about six or seven Cher and Sonny & Cher albums by then and I felt a real pressure to conform. But I didn’t crack, my friends. 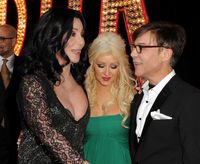 As a result,  I don’t have any episodes of Magnum P.I. with Tom Selleck burned into my memory or any Duran Duran singles either.  I did catch on the Billy Joel craze however. I’m not made of stone.

Wow, I remember him in all that stuff - especially Last American Virgin (awesome 80s movie), but I never knew his name. Did John like Goonies?

He DID like the Goonies...a lot. Said he had been confusing it with Gremlins all these years.