Chaz Records an “It Gets Better” Segment
The Burlesque Movie Book 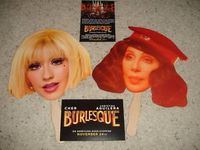 The soundtrack was first to be released November 16 but then was pushed back to Nov 22 (the film hits theatres November 24).  So that’s STILL enough time to memorize all the songs before you see the movie.

The soundtrack track listing was posted as follows:

Burlesqueis alive and well, having gone from 2 shows per month to about 4 a week in Los Angeles.

Lili VonSchtupp, Augusta Avallone, Steve Antin and choreographer on “Dancing with the Stars” and former Pussycat Doll Lindsley Allen are interviewed for the story. (Steve Antin’s sister Robin Antin was a founder of the Pussycat Dolls).

They talked about shows like “Monday Night Tease”, “The Rendezvous” at the King King, and even the famed Actor’s Gang group getting into the fun. Hmm…I don’t think I need to see Tim Robbins stripping…but okay.

LA even has a burlesque school called The Striptease Symposium.

Some interesting new movie press items have also been released.

The hand stick faces: do you think this will be a collector's item someday? 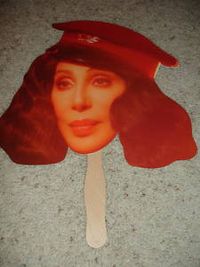 And the hot and tangy Japanese poster is out. 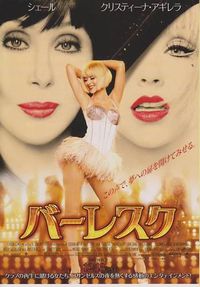 The new Japanese website: http://burlesque.jp/
See the trailer with subtitles.

And I wish I was still in LA to see this!! Burlesque ads on the Sunset Strip!! (Facebook's Team Burlesque posted the photo) 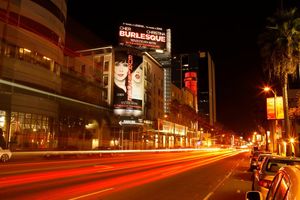 And there's a LOT more stuff to comment on...soon!