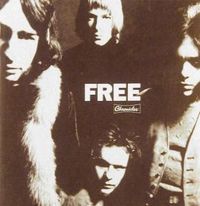 I have too much junk. Moving from house to house really weighs you down with all your crap. So I'm trying to purge some of the trash to garage sales, to charity and to the round filing cabinet in small amounts.

I found I had three boxes of cassettes the other day. I can barely play them. My boombox cassette deck broke and I sold my cassette component three garage sales ago. Alls I have (as they say in Missouri) is one little cassette walkman to play them on and when I play this thing I feel like I'm listening to an old record player with earmuffs on.

But listen like I have earmuffs on is what I have to do because I'm going thru them all, about a zillion mix tapes I made, my friends made, my Dad gave me, to see what is worthy of re-buying on iTunes. Happily, I found some old Free I used to like back in the early 90s (and Free was already 20 years old by then!)

I think their song "Goodbye" is awesome duet material. I used to think it was about a love relationship going sour, but I now believe it's about old friendships coming to an end and sad riffs that hopefully may someday heal...band-mates separating, posse members falling away…that melancholy stuff.

The lyrics are great (excerpted below) and the song has a solid late-60s/early-70s rock sound.

Goodbye, I hope we meet again
Is this how it's got to end?
we've come to the end of our road together
Made a stand that's gonna last forever
Brother tell me, what you're gonna do?

Paul Rodgers is an incredible singer. I do like Bad Company more than Free, however.

The song about picking the guy up on the side of the road and having a baby is by HEART- Its called ALL I REALLY WANT TO DO IS MAKE LOVE TO YOU. When this song came out in the late 80's everyone thought it was Cher