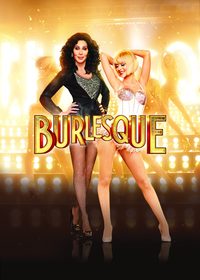 Burlesque is busy promoting itself two months out. Some say an onslaught of early promotion is a bad sign...for a bad movie. But we shall see.

Apparently a short commercial was seen on Glee(check your YourTubes). Cher also was featured in an Elle Magazine online list "The Elle-25" on August 30 with the picture below:

In a year of head-hanging cultural low points (we’re looking at you, Jersey Shore), ELLE presents the 25 best reasons to keep the faith—from the year’s must-hear genre-busting albums to Cher’s showstopping return to celluloid. (We’ll fist pump to that!)

She gave us indelible performances in ’80s flicks Moonstruck, Mask, and Silkwood. 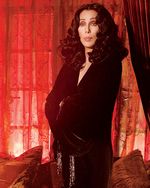 Now Oscar-winning triple threat and grande dame of camp Cher is back on celluloid as the tough-broad owner of a musical revue nightclub in November’s Burlesque. Belting out a racy number in a sequined bustier with enough screen presence to upstage all the pretty young things in fishnets (including Christina Aguilera and Kristen Bell), Cher’s mama hen nabs the movie’s best lines and flaunts the biggest hair.—R.R.

I was confused by an Aquilera fan's comments and thought this piece was actually an article in the latest magazine but I wasn't able to find it. I could only find these online versions:

Christina Aguilera fans had this to say about the coverage and photo:

That picture looks like something out of Moulin Rogue.

On the website it says the photo is courtesy of amazon.com where you can pre-order the companion book that comes out October 5th. I wonder if we'll be getting a sneak preview soon.  I ordered my copy!

Omnicient one says: Thank God Cher is in this. I wonder how much press they would have gotten without her.

I'm kinda concerned that Christina hasn't done anything for it yet. Cher's been in EW, Elle, now Vanity Fair, at the VMA's.

TeamTESS on Facebook is also starting to post screenshots from the movie. Is Cher on fire in that scene? 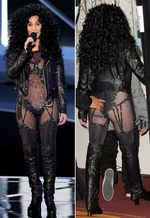 In other news, a writer at Huffington Post was happy Cher bared some ass at the VMAs last week:

Hooray for Cher! If She's Got a Booty Worth Baring at 64 -- Then Bare Away!

I say -- if Cher has still got a toned bootylicious body to die for, why shouldn't she flaunt it, just like she did twenty-four years ago when she first wore a version of this Bob Mackie-designed glittery getup? Listen, even 24 years ago her body was astonishing for a woman who was then 40. THAT, was a jaw-dropper at the time!