"Precious" isn't "Silkwood"
"I Have Lived In Many Houses..." 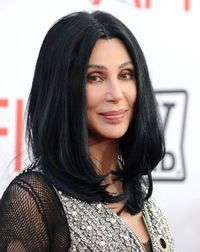 Not sure how long the Cher Facebook page has been up but fans on the Cher lists have recently been discussing Cher tweets that have been feeding back in to it.

I was under the impression (from complete, un-fact-checked rumor) that Facebook was fully against people misrepresenting themselves (didn't Lindsay Lohan fight them on this?) but in Molly Ringwald's new book, Getting the Pretty Back (just saw her at a Google reading...she said I asked a good question about Parisian women owning their beauty... was totally starstruck but that's another story.), she claims to be practicing on FB under an assumed name. Maybe FB has relaxed that rule.

Who knows. All I know is apparently Allure Magazine things it's the real deal:

Somewhere between Moonstruck and Kathy Griffin's hilarious story about visiting Cher's house, we fell in love with the singer and Oscar-winning actress. How could we not? Cher wore an 800-feather headdress on the red carpet. She danced on a battleship. And now she's giving beauty product recommendations on her Twitter page.

And she is not doing it casually, as she Tweeted yesterday: "I'll Never recommend anything Unless I Know it works! I've been around 100 yrs I know a Gazzilion cool things! I'm pass'n it on xxme."

She gives props to Proactiv, Jan Marini, and even Olay Regenerist (can you imagine running into Cher at the drugstore?) Check out Cher's thoughts on some of her other favorites:

Okay, I admit, whether this is Cher tweeting or not--I tried the eyebrow hairspray with a toothbrush thing. If you've seen me, I have Oscar the Grouch eyebrows. It's a good tip! Molly Ringwald's book also talks a lot about the importance of having shaped eyebrows...more important than makeup even, she says.

In other Cher gossip:

Billy Bush interviewed Cher on Access Hollywood recently and she did not collapse backstage in Vegas as one tabloid recently reported dramatically:

“Burlesque,” which opens on November 24,...has been filming for months and wasn’t easy on Cher’s feet.

Cher recently had to pull out of some of her shows at Caesars Palace after re-injuring her tootsies, and she said “Burlesque” didn’t help.

“You were [sidelined] for a night?” Billy asked.

“A couple of nights. Also, when I did ‘Burlesque,’ I was on 16 hour days in the highest heels I’ve ever worked on and it was hard,” she said.

As for her Vegas show cancellations, which occurred at the end of last month, Cher explained to Billy it had to do with her previous injury

“My toes [have] been broken a whole bunch of times so I was having a really hard time with it,” Cher told Billy. “I still am [hurt], but I’m working on [it]. It’s getting better.”