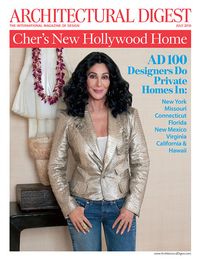 Cher's on the July cover of Architectural Digest on news stands now.

As the cover girl for July's edition of Architectural Digest, the diva reveals the "spiritual and spunky" interior of her Los Angeles duplex ... and a bit of her naughty side.

According to the Washington Post, Cher's movie Zookeeper (voice of the giraffe) will open July 8.

And everyone is still saying Burlesque will open Thanksgiving Day.

And apparently one of Cher's songs in Burlesque was written by Diane Warren:

Recently, Diane wrote an original song performed by Cher in the much-anticipated Screen Gems' movie, Burlesque starring Cher and Christina Aguilera. Other beloved hits include If I Could Turn Back Time performed by Cher, I Get Weak performed by Belinda Carlisle and Un-Break My Heart performed by Toni Braxton. 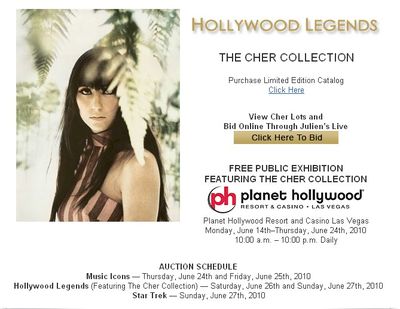 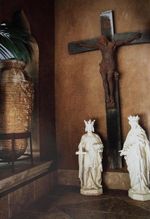 And what's a Cher sale without crucifixes?

Literally lots of them.

Juliens Auctions' "Hollywood Legends" sale is taking place in Las Vegas at planet hollywood. There are a plethora of other celebrity items, but Cher has 7 pages of her own junk to sell us, including scripts, roller skates ($300-500 for those babies), table tchotkes, wall mirrors, jewelry, Sonny costumes, Cher costumes, Bob Mackie sketches and the ubiquitous gothic books and trinkets.

Surprisingly, some record awards she no longer wants.

Where have we seen this outfit before?

Two lovely Bob Mackie sketches: for the "D'ove L'Amore" video outfit and the "All or Nothing" Farewell Tour outfit.

Some people collect sea shells. A case of "findings".

Splurge on the $100 catalog: http://www.juliensauctions.com/shop/index.php?l=product_detail&p=79

i love her and still have
so many AD magazines and
pages ripped from them
of all her wonderful houses
through the years...

My first one was in 1979.
the Egyptian house...
colors of sand throughout..
i loved that house...WANTED
IT!!! and still do...
she, eventually, changed the
color to black&gold...at least in her bedroom....

Supposedly, Eddie Murphy
bought it... if, i could
buy it; i would have RW
put it back, exactly, the
way it was in AD....
BUT, was this house by the
OCEAN???? i need an ocean.

PERHAPS,
one could build a scaled-
down version of that same
fabulous house... i saw
online, once, where this
couple were doing the same thing with "THE MUNSTER'S"
house....complete with a
stair-case that opened for
"SPOT."
AND,
i have always wanted to
live in the "BEWITCHED"
house... with Tony Nelson's
pad as a pool house...
since, i think they were
actually side by side on
the same lot....

AND, ever notice that
that speckled bird
foot-stool is in a lot of
cher's houses in AD??? must
have been her fav thing....

AND
if anyone out there has
AD features of her houses
before the Egyptian one...
please, send me copies...
would love to see THE
SONNY&CHER HOUSES....

Ron Wilson should do a coffee-table
book...like Bob Mackie...

Cher says in AD:
"i always wanted an
apartment that was one
big bedroom, because,
that's really where
I live."

"AD online.com" is showing a retro-spective of all of
cher's houses through the
years in JULY....