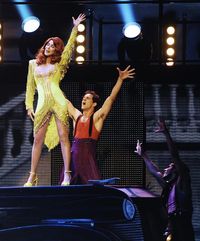 While convalescing (which entails staying away from the computer, sad to say), I went to see Cher and Barry Manilow in Las Vegas during the first weekend of May. My friends Julie and Dave and Nellie went with us.  The opening monologue still went on too long and generally confused Nellie, a Vegas singer and dancer. But the show as a whole was pretty great, especially with the new Bob Seger segment - a seedy rendition of "Fire Down Below" spliced with a fun-loving version of "Old Time Rock and Roll. Cher comes out as a male pimp/gangster (see Mackie sketch below...the real image of it is far more amazing, however) with a gargantuan feather towering over her head. Like in the video "Walking in Memphis" she nearly successfully sublimates her physicality with masculine motions. She appears tinier as a result. Just as when she does Elvis in the video. She quickly transforms onstage into a sexy redheaded moll in a yellow dress for the second song. Great sexy set and a creative and exciting performance. It steals the show for me. She sings "Love Hurts" now from the big pearl. 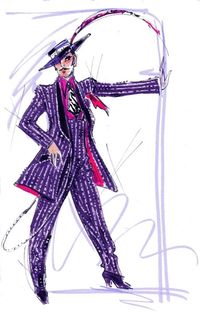 I Still Haven't Found What I'm Looking For
Laverne segment
Fire Down Below
Old Time Rock & Roll
The Beat Goes On
All I Really Wanna Do
Gypsies, Tramps & Thieves
Dark Lady
Half Breed
Don't Leave Me This Way
Take Me Home
Love Hurts
After All
Walking In Memphis
If I Could Turn Back Time
Believe

It was like a high school flashback to see Barry Manilow the next night. Actually, it was not my choice to see Barry. I've long lost touch with his career. But my husband chose Barry over a Cirque show, reasoning that Cirque will be in Vegas forever; Barry may not be with us forever. Since I was a pre-teen I've seen Barry quite a few times, including at the Hilton a few year's back when he first came to Vegas. His show at the Paris casino was very emotional for me somehow. Our tickets upgraded to the orchestra so I was closer than I've ever been and everything was much smaller scale and personal, including a lovely tribute the paintings of the Louvre.  He did a breath-taking (literally) rendition of "Weekend in New England" and no fans were asked to sing "Can't Smile Without You" for which I was thankful. It was very sad to think this may be the last time I'd ever see him.

But enough of that...Cher's Got a New Boyfriend! He had me at comics.

You can purchase his Ultimate Adventures book on Amazon.

He's also interestingly a Howard Stern co-hort and his dating  of Cher has been discussed on Stern's radio show:

Howard looked forward to his weekend trip to LA, saying he might go visit his old friend Ron Zimmerman at his new girlfriend's house: "[I'm] probably going to go up to Cher's Malibu place and hang with her and Ron...Cher doesn't know anything about it." Howard joked that Cher would probably sequester him to a 'safe room': "Ron told me they have a special room for people like me at Cher's house. Like Ron's riff-raff friends." 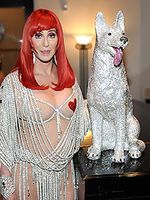 best way she knows how: with outrageous fashions and lots of sparkle! The pop diva is donating this crystal-studded ceramic dog to the Animal Foundation's Seventh Annual Best in Show event. Decorated with 11,520 Swarovski crystals, the dog will be available for auction, with proceeds going to charity.

The flashy canine was all the singer's idea, inspired by the glittery, sequined costumes of her current Las Vegas show. And though many Sin City headliners are donating similar works to the auction, Cher is by far the biggest name to participate.

Best in Show is a fund-raiser that showcases 60 dogs available for adoption from the Lied Animal Shelter in Las Vegas.

Josh and Cher on Oprah!

Oprah arranged a meetup between Cher and her huge fan Josh. I agree with Kitty's comment on the show positng: http://cherscholar.typepad.com/i_found_some_blog/2010/05/tv-alert-orpah-.html

It was very touching and I thought Josh was amazingly eloquent and possessed. Here is the experience in a nutshell (with a tiny bit of extra footage not seen on the show): http://www.youtube.com/watch?v=D1xQb15ENtk

And finally, an astute Cher Scholar emailed me this clip of Paul Anka singing the song "Flashback" just like Cher sang it on her 1976 I'd Rather Believe in You album: http://www.youtube.com/watch?v=B5RzOlDE7mk

Speaking of album, many new Cher album rumors are flying, including one that Cher would sing a new single "Already Been There" on the May 18 World Music Awards. There was no hint of that on the WMA web site and not surprisingly it didn't happen. Cher is also stoking rumors that she will tour again to support the new album, rumored to be released in conjunction with her new movie Burlesque around Thanksgiving this year. 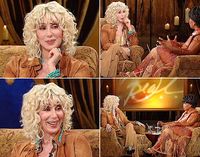 Cher will be on Oprah Monday May 10 (check your local listings). According to my Comcast listing, she'll be appearing with a fan. Interesting!

By the way, Cher Scholar is on non-Cher-related medical leave and convalescence and hopes to be back soon for further snarky Cher dishing!