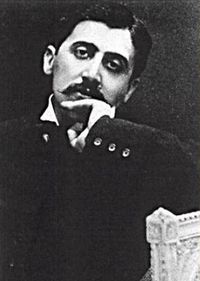 I find Cher scholarship everywhere…even when I'm wallowing in high-art subjects like French writers.  Listening to a books on tape during my daily commute, I've been enjoying the biography of Marcel Proust by Edmund White.

At one point, he talks about how Proust enjoyed writing “voluntary pastiche” (or impersonations) of famous society types, writers and actors of the day. He called them voluntary because he was willfully impersonating them in order not to “involuntarily” copy them later on in his own works. In other words, he did send-ups of other famous writers to get their iconic styles out of his system.

White states that Proust liked to pick writers like Flaubert and avoided others like Voltaire because their “simple and straightforward style was difficult to parody,” White continues, “just as Drag Queens avoid doing unadorned beauties such as Audrey Hepburn and are inspired by highly-constructed women such as Mae West and Barbra Streisand.”

Interesting way to put it: highly-constructed woman vs. simple and straightforward. It's the best reason I've heard put forward as to why certain celebrities are more easily and wantonly impersonated. If something is organic or direct, there’s no layer of added style to grab on to. And reasonably, it would be hard to do something as inauthentic as the art of impersonation on subjects so intensely authentic.