Would Marcel Proust Pastiche Cher?
My Husband Shoulders Through The Casablanca Years 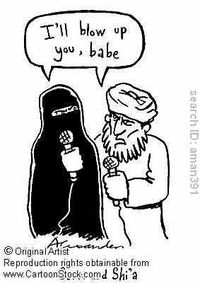 Wow. Hasn’t it been since like the late 70s since we’ve seen a good Sonny & Cher political cartoon?

(Thank you JeffRey for sending this to me.)

So I spent Easter day in San Diego and I must stay it was both a culturally enriching and perilous experience. Due to my old age and utter glee at being able to afford a short trip, I, many times over, forgot to pay attention to the GET GAS light that was blaring at me all morning. At one point my husband says, “Do we need gas” and I noticed the red and bright dashboard notice. Immediately after that, we passed the big blue inflatable King Kong waving to us from the east side of Highway 5 and I pulled off to the very next off-ramp…which alarmingly turned out to be the La Jolla Parkway! My beloved Bluebell sputtered and chugged out of fuel just as we were trying to make it over the steep Parkway overpass, a quarter of a mile from the gas station.

Thank God, John mentioned gas when he did because just moments and ten yards of pavement sooner, we would have been stuck on a death-defying, shoulder-less stretch of lane-merging Parkway. The nearness of a possible wreck made me start to hyperventilate soon after we pulled over. John called AAA and we got gas within 20 minutes. But in those 20 minutes of waiting I was convinced a speeding, merging SUV would veer off the road and crush the three of us (our furkid Franz was along for the ride), smashing us into a little tin can. I couldn’t help but think of two things: 1) at least I will die with those I have most loved and 2) was I just singing “There But For Fortune” this morning when we passed that wreck on the 405?

But on the bright side…

We saw the lovely San Marcos area, took a hike with ocean views, ate at the scrumptious Los Primos Mexican takeout place in Carlsbad, walked around Old Town (where a new “heritage” cul-de-sac of Victorian houses hovers intimidatingly over the old adobe streets) and Balboa Park, where we marveled over the Easter flowers and international cottages. We took home some BBQ from Kansas City BBQ near the Martin Luther King promenade and the Gaslight Quarter. It wasn’t very good and I almost wished we had instead patronized Jim Croce’s wife’s restaurant Croce’s.

Because I love Jim Croce songs.

We were driving home during the big Earthquake happening just below the border, one that everyone else felt except us (even our friends up in LA felt it). Was it because we were driving? We stopped at a rest area around that time and our furkid went nuts, barking at everyone and sniffing the ground. I thought the stress of being stranded on a highway with half-wit human parents who keep stranding him on highways (if he remembers Christmas day getting stuck between Barstow and Needles with a blown-out tire and a Needles gas station worker telling us angrily “No one will help you today! It’s Christmas!”) and all this highway shoulder time was finally taking its toll on him. But quite possibly, it was his heightened sensitivity to Earthquakes.

I love your life.