Name Dropping at the Academy of Country Music Awards 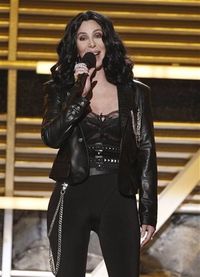 Does Cher plan to lasso some young and defenseless country singer with that chain on her hip?

The funny thing about Cher's Sunday appearance on the ACMA's is the sound of Reba McEntire introducing her. God love her, it came out more like ChhErr.

And Cher got a Standing O from this surprising audience. Well, it shouldn’t be such a surprise that they love a good femme-Elvis when they see one. Awww, they’ll all just closet fans, you know it.

But to back it up, Cher talked about her "country creds." You know, creds...credentials...authenticity. Hmmm. I would have bought it more if she had worn a cowboy hat.

I would seriously like to hear more details about her mom  Georgia Holt's gig with “a little band called Bob Wills and the Texas Playboys.” Cher also teased us about a duet with “my good friend Merle Haggard (wouldn't that be sweet!); but then she followed it up by saying she had a "hard time wrapping her head around "Haggard & Cher." She also spoke about the first song her mom ever taught her, "Hey Good Lookin."

At the end, Cher introduced Blake Shelton, who performed his No. 1 hit “Hillbilly Bone” with Trace Adkins. Blake had this to say:

“I’ve never met Cher, probably never will, but knowing that she said my name on national television – that’s badass.”

His girlfriend, Miranda Lambert, who scored various awards the same night for Video of the Year, Album of the Year and Top Female Vocalist of the Year, attended the show with her little shelter dog from Ada, Oklahoma, a dog coincidentally named “Cher.” During the show, the puppy waited backstage in the dressing room.

Jeremy Helligar of True/Slant had this to say about Cher's appearance:

Phase Two of Project Cher’s Comeback officially began on Sunday night with her appearance at the Academy of Country Music Awards in Las Vegas, where she’s been performing regularly since 2008. (Phase One was her presenting gig with Christina Aguilera at the Golden Globes in January.) She’s no doubt hoping it culminates with her third Oscar nomination for Burlesque, her first movie since Stuck on You in 2003.

Cher is the kind of star that we simultaneously love and laugh at, so there’s a surge of optimism surrounding her comeback hopes (or maybe that’s just among her gay fans). Though the presence of her more polarizing costar Aguilera means it could go either way, when it comes to Cher, who launched previously successful — and improbable — comebacks in 1979, 1987, and 1998, anything can happen, and it usually does.

An old People Magazine about Georgia Holt (who's larger story seems like it would be a very interesting tale): http://www.people.com/people/archive/article/0,,20071447,00.html

I thought she looked great, especially after seeing those pics of her surfing. Cher could have mentioned the wonderful job she did of singing with Kris Kristofferson and Rita Coolidge on her '75 show.

I was amazed at the respect she received with the standing ovation. Country Cred! And She Thinks I Still Care is an Enduring Cher country cover.

HEY MARY! I just read that Cher's new single is called "ALREADY BEEN THERE" and she is debuting it at the World Music Awards next month!

Wish I could have gone.

Normally I wait until I have the newspaper in hand on Sundays before working on the large puzzle, but I peeked at it on the computer last night and couldn't stop until I'd finished! I didn't even check it here till10 a.m., just slept like a log in total bliss...

Truth does not fear contention. The more the truth is debated, the clearer it becomes.