Sonny & Cher…Get It?
The Blog Post of Leaked Things

My Husband Shoulders Through The Casablanca Years 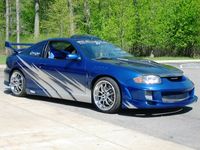 Imagine my husband trapped in this car, which looks similar to my ride sans pimping.

Because I'm working on a zine article about Cher's Casablanca tenure, my husband was made to suffer listening through three Cher albums last night while I was driving us to Hollywood. First we stopped on LaBrea to eat in Little Ethiopia at Rahel's. It was amazing and vegan. Lovely interior. We were the only ones in there all night. Then I took us to Amoeba Records where I picked up 3 Cher lps and 2 used CDs. More on those later. I usually try to even out my Cher purchases at Amoeba with some Elvis Costello or some Eels...just because the place is so painfully hip. But not this time. The horn-ripped-glasses-wearing attendant didn't even seem phased. In fact, he tried to cross-sell me the Half Breed album that was sitting in the Recent Arrivals bin. Then we went to Hustlers to spend the wedding shower gift-card we received almost a year ago. I can’t tell you what we purchased there but let's just say it involves The Munsters.

So after a full run through of Take Me Home, Prisoner and the bulk of Black Rose, I have to tell you John did not hold up well. And he is usually loathe to critique Cher in front of me. Even at the aforementioned wedding shower during the cut-throat Newlywed Game. When asked to name something he was sick of hearing about, he refused to say Cher. This is despite the fact that all other guests were imploring him to say Cher. I said Cher without skipping a beat. He said Barry Manilow. It was an odd moment of pop culture shame for me, that wedding shower moment: a) because my celebrity obsessions were public knowledge and even I am creeped out by this, and b) Barry Manilow? I didn't even talk about Barry Manilow when I was 10 years old and obsessed. There's just nothing to explicate with Barry Manilow. There really isn't.

By the end of the car ride last night John was reduced to yelling at policemen who were holding up the 405 freeway and gesturing frantically for our exit. All I can say is I've had to listen to plenty of The Decemberists over the last four years.