What Would Cher Do on a Date?
Chicago- and Dreamgirls-like Lighting for Burlesque

Cher in the Sun 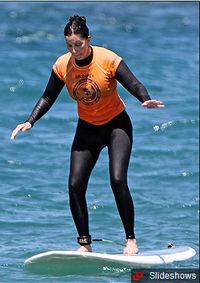 Okay, so usually there's the ubiquitous paparazzi shot of Cher in a clown-white beauty mask walking to her car from a Beverly Hills health clinic or spa. In fact, I've been fatigued by all the most recent paparazzi shots. Are they really worthy of re-posting and consuming? But then these shots pop up this week: Cher on the beach (okay, not unheard of) but actually enjoying the water…what an anomaly! I almost can’t get my head around it.  There was that paparazzi shot back in the 80s of Cher sunbathing on a boat with her ass tattoo unveiled. These things exist, I suppose. It’s just not as common for us to see Cher frolicking in the surf as it is to see Cameron Diaz doing it. Beauty mask shot is much, much more common. Flipping off the a-hole taking the picture…not at all unusual.

Do you think we’ll ever uncover pictures of Marlene Dietrich or Katharine Hepburn in the ocean??

Well, we did see Katharine Hepburn golfing, I guess. But I don’t think my astonishment has as much to do with the intrusions of the paparazzi, (which are granted and I feel an uncomfortable voyeur's guilt), as much as I am surprised with the idea that this is a sport of Cher’s time and she's partaking of it in spite of us.

It’s a weird moment of Cher being a media object and stubbornly refusing to be a media object. Of Cher being timeless (more and more becoming part of the secured rank of Hollywood's old glamor guard) and her being solidly, modernly of her time.

Cher has been caught having a fantastic time enjoying paddle boarding off the Hawaiian Island of Maui. Cher has a little trouble at times keeping her balance, but the pop queen ended up walking on water.

Walking on water? See? We jestly deify. We make timeless. Yet by paddle boarding, she stays in resolutely in time.