Chaz in the Media 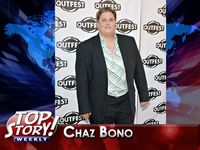 Can you believe I found a pic of Chaz in front of a step and repeat wall?

Since December, Chaz has been doing some light press. There was a People article I missed from December. You can see this, as well as all things Chaz on his website: http://chazbono.net/press03.html

Recently, he also did some interviews with CNN and Anderson Cooper to help publicize the CNN documentary on transgendering "Her Name Was Steven."

Starting the hormone therapy was "like going through puberty as a 14-year-old." "Your voice starts to deepen. You start to grow hair. You start to gain muscle mass."

Chaz says he's "so much happier, more confident... My life just feels right now. And there was always some kind of disease within myself before that just doesn't exist anymore."

As for how his family is dealing with the change, Chaz says they've been "pretty good" — though he doesn't speak about his famous mother specifically.

"My family's been pretty supportive," he says. "Everybody kind of comes to different points of understanding at different times...I've been talking about this for years, because this has been something I've been struggling with for years, so it wasn't really a surprise... And everybody's been pretty good. Pretty good."

By the way, Newsbusters is a right-wing news website that claims to "expose liberal bias in the media" similar, I suppose, to Media Matters on the left, a website which calls out conservative lie-making. I find it very interesting that Newsbusters covers gay issues at all, as if accepting gay and transgendered people takes a liberal bias. Which is, by the way, exactly what they believe. Their title is telling "CNN's Cooper Interviews 'Chaz' Bono as Part of Pro-Transgender Publicity." So, CNN is being implicitly criticized for interviewing Chaz "sympathetically."

These site's usage of terminology exemplifies how progressives and conservatives typically use language. Conservatives bust and bash with force. Progressives whine about what matters. I find It frustrating.

Video of the CNN interview: http://x17online.com/celebrities/chaz_bono/chaz_bono_to_anderson_cooper_i_felt_like_one_of_the_guys-03122010.php

It doesn't seem that Chaz is hugely comfortable being a spokesperson yet, although he is confident about his decision. You still see a lot of brow wrinkling in interviews.