Last week was quite a bit challenging for me. The company I work for, ICANN, held a high-profile meeting in Nairobi, Kenya. Terrorists threats were made against the meeting venue, notifications from high levels, many participants backed out, and therefore remote participation (meeting video, audio, transcripts) was in demand unlike for other more typical international meetings. My team coordinates with other IT personnel to make this remote participation work. Long story short, my work day morphed into a schedule that went from 2 am to 10 am.

To keep awake, I played crime shows like Cold Case Files, First 48, Snapped, and The Investigators in the background (hoping to glean fodder for a novel) while I worked. All the murders...oh, the many many pointless and gruesome murders.. and the late nights of solitude drove me slightly bonkers. One night I saw an Investigators episode about LA celebrity-stalker prosecutor Rhonda Saunders who talked about Madonna's nutty stalker among other lesser-known cases. It was truly frightening, a notable quote being: "There's a thin line between a dedicated fan and a stalker." God, help us.

This quote inspired me to forgo visiting Elijah Blue's art show and instead spending my first day off, Friday, at Dog Beach with Franz and the hubby. There's always time for an obsession check, no?

Do one for yourself. 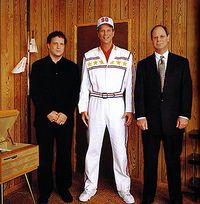 But a Cher-connection-free  weekend in LA is slightly improbable.

On Sunday night I was fortunate to have been able to attend the Curb Your Enthusiasm cast panel at PaleyFest 2010. The awesome lineup included pre-teen pals Richard Lewis & Larry David, Cheryl Hines, Jeff Garlin, Susie Essman and Bob Einstein, who plays the always-disgruntled Marty Funkhouser on the show.

Young people may only know Bob Einstein from Curb Your Enthusiasm. Or you may be familiar with the character of his alter ego Super Dave Osbourne going back all the way to the 1970s John Byner Show or the 1980s John Byner show Bizarre.

Or you may know the quirky bit of trivia that Bob Einstein and Albert Brooks are brothers. See them above with their other brother, Clifford. How bizarre is that? They seem at total odds: Funkhouser and Nemo's father Marlin, Super Dave and the comedic schlub of many an 80s movie, including most notably Broadcast News and Lost in America.

Or you may know that Bob Einstein and Steve Martin where the famous writers to come out of The Sonny & Cher Comedy Hour,

freshly plucked from their historic tenure as writers for The Smothers Brothers.

Again, there's a world of difference between the comedy of not only what came before Sonny & Cher's show, the political and sexual boundary-pushing humor of the Smother Brothers' show, but what comedy came after Sonny & Cher: The Jerk, Super Dave, Let's Get Small and the hilariously vulgar and cynical humor that Bob Einstein displayed Sunday night for the Curb Your Enthusiam panel, jokes that made even the stoic Larry David laugh and Jeff Garlin hoot like an owl. He stole the show from a panel of brilliant comedians discussing today's leading cutting-edge television comedy.

I've been retelling his jokes all day. The guy's still got it.

Posted at 10:01 PM in Peripherals, That's The Obsession Talking, What This Really Says About Me | Permalink | Comments (0)