Paparazzi Suckage and a Rare Accolade for Sonny Bono 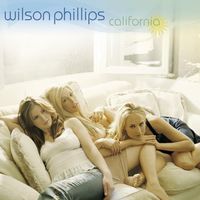 Vulture-like photographers descend on them as they separately exit an art show on Melrose. It really shows the true claustrophobia of the situation.

Of course by watching this, you become part of the problem. The same photos can be seen on the Huffington Post. Sigh.

I've been a bit preoccupied with potential job loss, annoying battles with people here and there and other such things the past two weeks. On a slight bright note, I have been receiving some awesome Cher Zine 3 content that I am really excited about and I've started to write some poems for a new book. But it's been a stressful few weeks all around.

As I was driving to my job this morning, I listened to a Wilson Phillips CD my friend Christopher gave me as a gift for puppy sitting his two girls Zella and Kizzy. (He also gave me the awesome Nicole Atkins Neptune City album).

I do like Carnie and Wendy on TV (especially Carnie on Celebrity Ghost Stories, a show I absolutely adore) but I have never really liked the singing group Wilson Phillips. Their records always seemed passionless and vapid and their videos dull and mediocre. But I was willing to give their 2004 album of 60s and 70s covers a try. It was their first album in ten years and they covered not only their parents' material but Linda Ronstadt, The Eagles, Fleetwood Mac, The Byrds, Jackson Browne, Joni Mitchell and Neil Young.

Most of the album songs are solid misses. Flaccid remakes. Uninspired. Chynna does do a passable version of her parents' "Monday Monday" and the cover of "Go Your Own Way" is quite good, but I think that's more a testament to how freaking awesome the song itself is. However, the album liner notes by Mitchell Cohen made me do a double take.

We have gathered her to celebrate California. California music to be more exact...a myth that radio wrought, and everyone bought...

Blame Brian Wilson and John Phillips. While you're at it, blame P.F. Sloan and Jimmy Webb and Jan Berry and Jackie DeShannon and any number of Eagles and anyone who ever wrote a song that David Crosby sang harmony on. Not to mention McGuinn and McGuire and a few transplanted Canadians. They defined Southern California for anyone with a record player...

Getting Wilson Phillips to embrace this idea was one thing; getting everyone to agree on material was something else altogether. Right now you're looking at the track listing and asking, "Where are the Association and the Turtles and Love, the Merry-Go-Round and the Grass Roots and Johnny Rivers, Zevon and Newman and Nilsson? Where, for goodness sake, is Sonny Bono?

Wow! That is something. To initiate Sonny into this list of the major artists of the 70s and 60s who defined the California sound. You don't see that everyday. And it is really, really cool. And long over due. And part of a revisionist re-evaluation of Sonny & Cher's contribution to rock music. To not only include him in the list but single him out at the end...quite extraordinary.

It made me very glad this CD crossed my path.

Cher Sighting & a Week in the Life of a Burlesque Actress 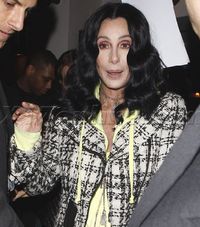 The interview of the cast from Entertainment Tonight

Cher commenting on her young co-stars:  She talked about working with such spunky starlets as 20-year old Christina Aguilera, 29 year-old Kristen Bell, and 21 year-old Julianne Hough.

“It’s a hard job. You get up at 5am and try to look good. All these girls are a third my age. That is rough.”

But she had good things to say about Aquilera:

“I’m shocked but she’s really good. The other day we were hamming it up so badly, so old, like vaudevillian. She was ­keeping up! She was hot. Her game is good.”

I wonder what the moves of Christina’s game are? Because Cher’s game is pretty good.

And likewise, Christina Loves Cher too(no surprise)  What about the reported feud?

"I love Cher and I never knew just how much before I made this movie. I have always had tremendous respect for her. She is a woman who did everything before anyone else did it," she says. "She is an icon and she inspired me through some of my career. We've had similar costumes too!"

Hmm…I don’t really like Cher’s costumes being compared to anyone else.

In Burlesque, Christina plays lead character Ali who escapes from a small town and heads to Los Angeles where she dances at a neo-burlesque club run by former dancer Tess, played by Cher.

Co-star Kristen Bell said she liked “the relaxed attitude adopted by the Cher on set”.

Kristen - who plays dancer Nikki - said: "Cher owns the club and we play best friends, I'm her lead dancer and Christina sort of comes in between the two of us and I'm not very happy about that! I could talk but I was definitely having to take a breath and I was going, 'I'm in a room with Cher right now', but she's so personable and down to earth, it's not really what you expect, she's very easy to be around."

LA Times has a funny spin on the love-fest of the movie set.

Can't we all get along a little less?

Don't get us wrong, we love good vibes among star casts -- especially the cast that upcoming "Burlesque" boasts: Christina Aguilera, Cher, Stanley Tucci, "Twilight" hunk Cam Gigandet and Kristen Bell. "Entertainment Tonight" got the first sit-down with the bunch, currently shooting the project in Los Angeles, and it seems even the film's headlining divas are playing extremely nice.

"The other day we were hamming it up so badly ... ," Cher said of a group scene. "She was hot, she was really up there, her game is good."

"Heroes" actress Bell, her normally blond 'do a nearly jet-black mane, says the legend is everything she expected and more. "You don't get to be more of an icon than she is, and there are very few people who have that status. She so delivers in every way," Bell said.

No screaming or sabotaging of costumes? No tears or measuring of trailers? Let's hope there's plenty of  drama on screen! -- Matt Donnelly

Later, Cher was seen (as pictured above) at Quentin Taratino’s party at La Vida.
http://x17online.com/gallery/view_gallery.php?gallery=cher020910_X17 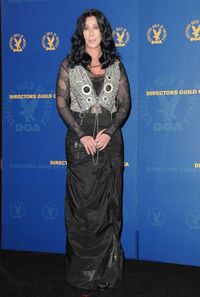 Cher: “We are having a great time but don’t make us prove it!”

According to Cher World you can also now pre-order a photo book of the movie! Whoo hoo! With a foreward by Cher. Ooooh Cher Goodies!! I am so psyched! We had a very exciting week at Chez Cher Scholar. My now-husband  was asked by his national union to speak yesterday on behalf of all claims processors for the US House Committee on Veterans Affairs, Subcommittee on Disability Assistance and Memorial Affairs.

And I'm proud to say he did swell. First of all, he’s a writer and so was able to deliver some well-made speech. And then he’s got this thing that I completely do not have: charm.

What an amazing experience. 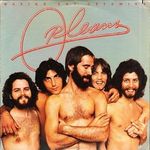 It’s still pretty boring stuff if you don't have a lot of feeling about claims processing. But if you really love the subject, here are the written statements and the congressional names on the subcommittee, of which the 70s band Orleans guitarist and co-founder is the chair. (If you have this picture in your history and you still manage to get elected for congress...America is truly great!) http://veterans.house.gov/hearings/hearing.aspx?NewsID=524

This week reminded me of Cher’s 2006 summer visit to the House Armed Services Committee in support of Operation Helmet. Although she didn’t speak, she raised awareness behind the testimony of Operation Helmet’s founder Bob Meaders. Here is one of Cher’s favorite shows, Washington Journal, talking about Operation Helmet and the congressional hearing that would follow the next day (http://www.c-spanvideo.org/program/192937-6) and news coverage about the hearing itself  (http://abcnews.go.com/Politics/story?id=2082716).

Watching a congressional panel, I think how funny the people sitting behind testifyers always look. Who is the guy with the gray beard behind Cher?

Keep giving to Operation Helmet. It may help prevent a future backlog of head injury claims to the VA in the future.

And apropos of nothing...

here are some people with Cher's name tattooed on them. http://spugwit.blogspot.com/2010/01/tattoos.html
(you may need to scroll)