TV Alert and A Happening in Movieland 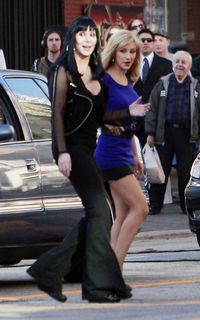 First things first: Cher will be a presenter this Sunday on the Golden Globes: http://abcnews.go.com/Entertainment/wireStory?id=9511158

Let's take an inventory. According to imdb, Drop Out is still in pre-production and not much information has been assembled on it (hmmm--not good news.) But Zookeeper is already in post-production with a release date of Oct 8! Yipee!

And Burlesque is filming even as we speak.

Last week, film action was seen on the streets of Hollywood with pictures and video posted on the Internet immediately. It has the looks of unwanted paparazzi. Which brings us to an interesting point:  Cher is making movies now in the hyper-media blogging age. Filming a scene on the street now is hard to hide. Internet news cycles now provide near-real time sneak peaks into things.

I can’t imagine this scenario during the filming of Witches of Eastwick (by the way, what happened

to this orgiastic scene from the movie? Does anybody ever wonder where this still came from?). As it turned out, I was visiting my brother in Massachusetts when Witches was soon to be in production there. The locals were the only ones who knew of upcoming filming dates because extras were being sought.  I don't know if filming ever happened there (people from Wicca created a fuss), but I felt like such an insider for knowing even that measly piece of information. Much has changed.

Here are many shots of Cher on Burlesque filming January 7:

What's your vote on that jacket?

Below is actual video from the filming:
http://x17online.com/celebrities/cher/cher_goes_burlesque_with_kristen_bell-01082010.php

The release date for Burlesque is November 24, which is earlier than the previous estimate of 2011. Let's hope everything goes well.

I just want to say...this movie is full of the beautiful people. 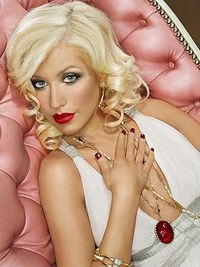 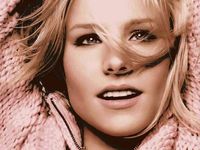 Stanley Tucci is in Burlesque, no? He could qualify as beautiful.....sort of.

And what is "Zookeeper"?

It's a new Adam Sandler movie...animals have voices...Cher is the giraffe.