My Cher Fantasies
A New Year, A New Caesars Program 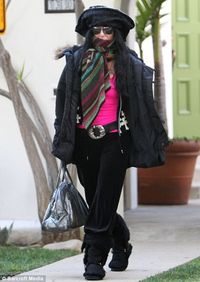 All over America…it’s CA-HOLD! Even in our warm little paradise of Southern California. Look! Even Cher is cold.

Here is a blow by blow of the shopping expedition (it’s like the paparazzi is following Lewis & Clark. Do we need this much useless information?)

She and a friend headed into Beverly Hills where they stopped at department store Barneys New York, where a pair of long black boots caught her attention.

In true celebrity style, she kept her dark black sunglasses on but ditched the big coat as she warmed up during her spending spree, showing off a trim figure in snug velour tracksuit bottoms and a tight hot pink vest top.

Still without her coat, she dashed out to her stretch limo but battled with her scarf as she tried 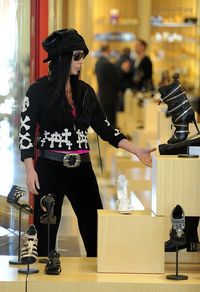 to pull it back over her face again.

Cher then visited a day spa for some pampering before heading to LAX International Airport where she flew off to Las Vegas by private jet.

The Grammy-winning singer began a three-year residency at the city’s 4,300 seat Colosseum at Caesar’s Palace in February.

Last Tuesday, she celebrated her 100th show and throwing a huge party for her crew. She hired the Las Vegas Pussycat Dolls revue girls to perform for her and her bandmates, dancers, acrobats and technicians at the Pussycat Dolls Lounge in Pure Nightclub at Caesars Palace.

Buzzfoto didn’t like the hat, but has self-awareness about living in a world of Cher hats:

Normally, we’d ask WTF was this star thinking for being allowed to go out in a hat like this, but since it’s Cher, we won’t even bother trying. Cher shopped at Barney’s yesterday. We hope she purchased something to replace that atrocity on her head.

The Coverage with More Photos: