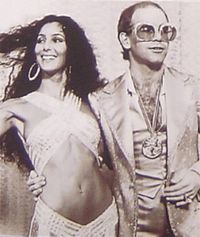 In other very important news, Elton John and Judy Garland were declared top gay icons by OnePoll.com. This is an interesting choice of Elton John. At first I didn’t like it but it is growing on me.

This choice shows us that gay icon represents more than just a singer gay men or women love, but a person in the position of ultimate representation and activism. John’s recent efforts to adopt a son have highlighted family-value issues as understood within and outside of the gay community. So, it’s a fine choice.

It is interesting to see how the male/female winners and contenders were different in the ways they tended to be iconic:

Meanwhile, the female list was full of glamorous female stars – including singers Kylie Minogue, Madonna and Cher – rather than famous lesbians.