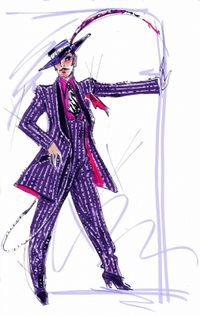 Tickets for year three of Cher’s Caesars show went on sale on my wedding day, new shows starting April 10, 2010. I still haven’t bought any tickets yet. I heard that Barry Manilow is moving to the Paris Casino for a more intimate show. Is that another way of saying low ticket sales booted him out of the larger Hilton theater? In any case, I would like to bundle these shows into a Cher/Barry Manilow weekend so that I can recreate a typical weekend of mine as a pre-teen spending quality time with my parents’ phonograph. Yes…my parents had no record player; they had a phonograph. That’s how old I am, kids.

There’s a new Bob Mackie interview where he talks about the show’s new costumes and how Cher’s favorite color-schemes for them have evolved over the years. Now she likes day-glo green and hot pink. Wore orange once but now really hates it. Wasn’t the Sonny & Cher Comedy Hour color scheme orange. There was a lot of orange going on back then as I recall. Cher has also added “The Fire Down Below”,

the old Bob Seger tune she sang in late 80s/early 90s shows, back into her set with a New York stage and zoot suit a costume. http://www.cherworld.com/news/?p=873

And Cher will mark her 100th performance soon if she hasn't already.

Mary,
i am very sorry i said those things on your
"wedding post"...
please go to that post to read all...

Thank you Dann for clarifying the date for the #100 show!

No prob... Cher didn't say anything during the show that it was her 100th, but the crew got a nice "Congrats on your 100th" cake, and they all partied afterwards.

I hope that it's over after the next 100 and she doesn't extend her contract... As much as I love the show and am glad to see it evolving a bit, I still think that she never should've done it in the first place....

Mary - it's me Dishy. I sent you an email to you and not sure if that one is still open. It's me - DISHY! I have a wedding gift for you that will trump all! So please send me your mailing address. Love you and congrats.

Dann, that's interesting that you say that about Cher's Vegas show: loving it but thinking she shouldn't have done it. Can you elaborate? I have conflicting thoughts about it.

During the three or four years when the Vegas rumours first started up until it was announced in early '08, I kept hoping that it wasn't going to happen... To me, it just seemed like a "been there, done that" career move for Cher since she was practically the Queen of Vegas in the late 70s and early 80s. As much as I love her music and concerts, I was hoping that she would concentrate more on acting and/or directing after The Farewell Tour... And, even though I love the show (and The Cher Store too, of course!) and I do understand the reasons why Cher probably agreed to do it, I still wish that she wouldn't have.

I will admit that I do enjoy the opportunity to see Cher do a Vegas installation in my lifetime; since I was too young to drive to the last one! But I too was thinking we were headed for more music, movies or some Audrey Hepburn-esque charity phase. There must be gobs of money being made with the circus.