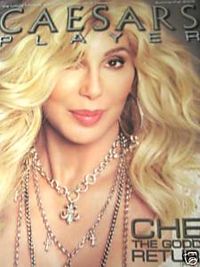 Feeling out of the loop in Cher list news and down and tired in the midst of editing processional music in music editing software I was learning, I went to ebay for the first time in quite a while to cheer myself up with Cher goods.

Wait a minute. I just realized I’m looking for a break out of my wedding obsession with my celebrity obsession…that’s not good.

Sigh. It’s all relative I guess.

Anyway, I found some Caesars’ brochures and the new Caesars Players Vegas magazine out with a new Cher spread and interview. And it's the best new interview in a long while – great layout (although I miss a magazine's original Cher photos; why must they capitulate to using Cher's PR photos?).

There's some good info here. Cher has an iPhone with some calendar feature where she seems to be adding spontaneous messages to Sonny. I wondered if this worked somewhat like a diary but I have yet to get my iPhone (can't wait!) so I'm not exactly sure what she was referring to.

Cher remembers that Chas helped the show behind the scenes during the last Caesars run of the late 70s. I remember pictures of her in the 1979 People Magazine looking quite helpful. Cher went to the gun range with her brother-in-law and fired a 9-millimeter and an automatic rifle, and that she likes to try things she’s afraid of. Which is a good thing. My bf talked me into taking a gun-firing class a few years ago. You never know when you’re going to need those odd skills. Cher wants to take tennis lessons too…all her friends play. She says she loved sports in school and was real tomboy.

To keep in shape it's weights, running, ballet, yoga, and the occasional hike on mountain trail with the aforementioned iPod. Cher loves to sing outdoors to the tunes of Springsteen, Bob Seger, Hall & Oats, “all the old people” she says.

The reporter states “the stage of her show in essence doubles as a runway.” And I think it helps to frame her show in this way. Which is why I feel Cher would be so awesome on Project Runway as a dual guest with Bob Mackie.

Cher says, “On a given night, a song will be more fun to sing or seem newer and I sort of forget I’ve done it hundreds of times.”

Their filmography of her does claim Drop Out in 2010 and Burlesque in 2011 (wah! Long wait). This confirms with JimmyDean posted a week or so back from his sleuthing at the Cher Store. Cher says she picked the film Drop Out because she loved its 14-year old humor...it made her laugh. She liked Tropic Thunder for the same reason.

The discography only covers Cher albums with the exception of the Allman and Woman album; and All I Really Want to Dois completely out of order, listed as her 3rd album in 1966. Backstage is called Cher Backstage. She delayed working on a new album because she chose to vacation during her last break.  Tough titties for us, huh? 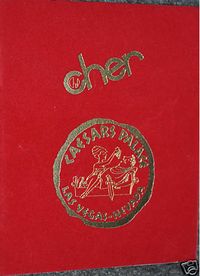 my sister saw the show in 1979 and brought that little velvet covered booklet back to me... it was small and had 2 little b&w pics inside...
so, don't let all the planning and work get in the way of enjoying yourself and your wedding....
jimmydean

for halloween
i have in my netflix queue

"COUNT DRACULA"
its from the bbc with Louis
Jordan as the count... it was a pbs mini-series from 1977 that used to aire each halloween...
also, have
"THE HORROR OF HAMMER"
i love the Hammer Horror films from the late '50s,"60s,'70s....
christopher lee, peter cushing,ingrid pitt,david peel,barbra shelly,etc...
"HOUSE OF DARK SHADOWS" AND
"THE NIGHT STALKER" will be good ones too....also,
"JACK, THE RIPPER"
with Jack Palance...he also
did Dracula too.......
jimmydean

Take those tennis lessons already, girl! That's one of the things she complained about Sonny not letting her do over 35 years ago.