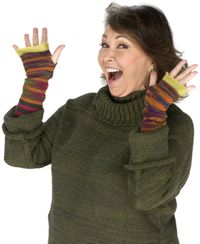 I don’t know what else Roseanne is up to other than running a website.

Roseanne Barr just launched "Cher and Chaz," her hilarious Web sitcom on Roseanneworld.com, imagining what it's like at home for Cher as her transgender daughter Chastity turms into her son.

I can’t believe there are actually news items on this comedy web sketch:

And news about Cher not diggin it: http://www.pr-inside.com/cher-not-laughing-about-roseanne-s-online-r1454775.htm

I haven’t watched it yet, I must admit. But although I have nothing against this sort of send-up (I’m mostly in the nothing’s-sacred/anything-goes comedy camp), Roseanne is datedly and decidedly not funny in general so I don’t have high hopes for this sketch of hers.

My resistance to sacred cows is what allows me to enjoy Howard Stern, a true provocateur. But if Roseanne were a true provocateur, she’d have the pulse of the people and the power of moral authority behind her. And she’s repeatedly failed to prove she has this power, many stunts after trying (the baseball game howling of the National Anthem and crotch-grabbing being the most infamous example of a failed attempt). She just misses the mark most of the time. No -- Lenny Bruce she is certainly not. And I wonder why. I think it’s because she comes across as a mean-spirited loner, honestly, whether she intends to or not. The perception is that her shit seems self-serving, never sincerely self-deprecating.

This can also be seen in the trajectory of her old 80s sitcom, Roseanne, which I initially adored, by the way, for giving American TV a somewhat normal, lower-class, non-skinny Midwestern family to watch. However, the more control she exerted over the show, the less typical the family became, the more melodramatic the plots were, and the more she tried to hit us over the head with laboriously provocative material.

Meanwhile, provocative dramas and comedies have come and gone from TVLand with real moral pathos and authority. The Roseanne circus ruined her show and, as a result, it jumped the shark much sooner than it deserved to. Somehow she just misses the boat comically. 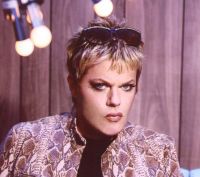 Seriously, I’m not opposed to poking fun of Chaz’s somewhat historic story. Humor is not always mean-spirited; sometimes it’s cathartic for a society to process its dramas with laughter. Never a party when you’re the subject of it; but we all take a turn in this life or the next. Still, Chaz deserves a higher-caliber ribbing than what Roseanne can provide. And don’t send me Bruce Vilanch, please! Eddie Izzard could seriously do this.

I like Roseanne and am not against her doing this, but I watched one of the clips last night on You Tube and thought it was really dumb.

I ADORE your website, being one of the biggest cher fans alive HOWEVER, you really need to have a sense of humor and enjoy the SPOT ON hilarity of drag artist Jackie Beat who plays Chaz in the well thought out and hilarious parody. Nayda Ginsberg's Cher is genius as well.

I think the humor is actually very pro-lesbian - the joke is that despite looking like a lesbian Cher is dismayed that Chaz cannot do what lesbians are supposed to (according to the bottomless pit of convenient, homophobic punchlines) such as fix her car or want to see a vagina. I'm not up to analyzing the humor much further, but the actress depicting Cher is so strong and nails the very adroit and dialogue that pounces out at you. The only time these sketches go down in flames (yes I'll go there) is when they try to set up Sonny's entrance as a micro-angle lit up like a light bulb. Roseanne is actually a great comedienne in my opinion - she enjoys making people uncomforatable, not by being mean at all, but it's the desperate moments where one is unsure (like the national anthem debacle) whether or not she is going to blow you away with a punchline to reel you back onto her wave length. Hit and miss, at least she doesn'y just stick to the same - plus Barr is not a visual joke, she drives her material and isn't part of the car crash herself.

Okay, writing far too much here. But I think Cher fans will find the performance of Cher a real hoot - the Chaz character is a mere prop.