New Mashup for Cher Kiddies!
Can You Dig It? (Notes on “Somebody”)

Worth a Sniff – An Uninhibited Revew 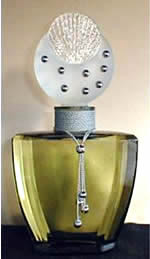 There's a cool page on Cher’s 80s perfume venture Uninhibited on the site Perfume Posse (their tag: “Perfume is our poison”): http://perfumeposse.com/2009/07/26/cher-uninhibited/

First of all, I love the idea of a “perfumista cult” – and I love that perfume experts are dissecting Uninhibited so expertly, so scholarly! They’re using jargon like “notes"and “drydowns”! How exciting!

[the perfume] “manages to convey both sensuality and aloofness.”

So I’ve gotten to try one of those perfumista cult perfumes – Cher’s Uninhibited, thanks to Melissa!   I love the bottle, isn’t that a gas?  I had a heckuva time finding a decent image.  This is allegedly a factice, which I think looks like the parfum bottle, with a frosted glass (crystal?) half moon stopper.  The stopper on the EdT bottles is silver toned.

I personally would expect Cher’s fragrance to suck, only because so many celeb fragrances do.  According to Basenotes, Uninhibited was inspired by two fragrances Cher wore together: Charles of the Ritz and Jean Laporte Vanilla. Since I don’t have either of those I can’t say, but Uninhibited has been discontinued for some time and fetches premium prices online.  It shows up on eBay and it appears to be available at a couple other sites.

Notes are lily, peony, dried fruits, ylang, orris, magnolia, vanilla, heliotrope, musk. I’m finding that list a little suspect, only because Uninhibited doesn’t smell as sweet as that list would suggest.  In fact, the opening smells like aldehydes to me; for the first few seconds you could be smelling some chilly Chanel.  It’s a dry cocktail of a thing at that point.  Then the fragrance opens up and sweetens on my skin, but never gets all that sweet.  It’s powdery the way orris can be powdery, and the heliotrope isn’t overwhelming.  The drydown’s really nice, a slightly tart musk that manages to convey both sensuality and aloofness.

I think Cher Uninhibited fits in nicely with Cher’s image of the time – it’s fierce and strong and yet retains a sense of humor.  It also has that pre-gourmand vibe when “sexy” smelled like musk and patch and civet instead of like baked goods.  I’m not sure I’d go to the ends of the earth to get my hands on a bottle, but if some comes your way it’s worth a sniff.

i bought some for my sisters and mother....
for some reason, i never bought any for myself...( i think i was struggling with my homosexual shit at that time... SAD, hun????)
AND now, no has any thing left as a collectible from that time........

My mother was working in the Estee Lauder department at Dillards when this came out and she got me all kinds of goodies from the displays to the bottles I could set up a counter now just like in the store.

I have to say...I was at Macy's NY when Cher was there promoting it in person....ALL the windows were HUGE Cher displays showing her videos of the time (Found Someone / Sleep Alone) it was crazy! I got tons of promo items and have loads of the cologne - my one perfume bottle a drunk friend knocked over once and it is almost all dried up! Damn him!