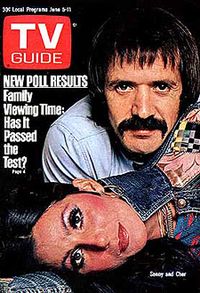 This has been a busy week of weddingness: we assembled and sent our especially designed invitations, my dress came in and I had my first fitting, we met with the photographer and walked around our venue looking for photo shots. So I didn’t have much time to contemplate Cherdom this week. However, something pretty amazing happened, Cher-related.

So I’ve been a Cher fan since I was about four or six years old (1974-1976). I’m not really sure when I started exactly. I do remember it was one of the first aesthetic decisions I made, but the timing is so hard to place, looking back. I remember watching the first variety show with my parents when we lived in Albuquerque -- so that must have been in 1974 (I would have been four). I loved both the show and the two records my parents had (Look at Us and All I Ever Need is You). My Albuquerque friend Stacy got the Cher doll before I even knew there was one. This must have been in 1976. I was mildly outraged and discouraged that someone who was as passionate as I was about Sonny & Cher was not the first one on my block to get the doll. So I petitioned for it for Christmas and got one with a handful of outfits. I remember thinking that a fan of my caliber should have all the outfits. This is how it has always been you see. I took that doll to show-and-tell in first grade and, along with Stretch Armstrong, it was the most popular show-and-tell toy. Both dolls were broken that show-and-tell day as a result of their being so manhandled. Cher’s hands were broken off and Armstrong was punctured until his innards started oozing out.

I got the S&C TV Guide cover soon after, which I adored. Until my oldest brother told me I should stop slobbering over it because S&C were divorced. Tragedy of all tragedies! Why hadn't anyone told me! Then we moved to St. Louis  (and I think this is where I got the idea that moving was a diversion to heartbreak) just in time to watch the second variety series when my parents agreed to let me stay up past my seven-year-old bedtime once a week in order to watch it. But those good times were all over before I knew it (cancellation) and I was left to lick my wounds with that awful 1979 Solid Gold special which launched the very lame lip-synching series of the same name. I think it’s right around that time when gold started to lose its luster for me.

For Christmases and birthdays during the brief era of 1977 to 1979, my parents purc 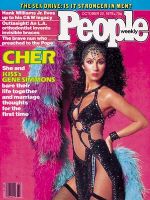 hased Sonny & Cher albums as gifts for me. And when I was sick with the stomach flu in 1979, my mom bought me the famous Cher People magazine cover issue with the hole-fit and the pink boa.

But this is all a long, long backstory just to say that SINCE THEN my parents have definitely not approved of my Cher obsession, and certainly not long after I learned how to drive and immediately chose to cruise across town to used record stores for Cher lps. Enough was enough already. Normal kids don’t have celebrity obsessions and if they did, they were more current acts like Duran Duran and Don Johnson (God help me—you see what I had to choose from?).

Flash forward to this year. These are the songs I picked as choices for my wedding’s father-daughter dance: “Take it to the Limit” by the Eagles (which was nixed because my brother and father interpreted it to be all about sex), “I Hope You Dance” by Lee Ann Womack (which my father didn’t love), “What a Wonderful World” by Louis Armtrong  (kind of clichéd, I felt), “Heavenly Day” by Patty Griffin and “IGUB,” which did come up but was controversial because it was sweet as a father-daughter dance but essentially a couple's song.  Between the two of us, my father and I didn’t agree on or couldn’t find anything on the many online lists of father-daughter-dance suggestions full of maudlin and sappy sentimentalities. One big problem I found was that most suggested songs were for younger brides (“everything she owns I bought her”) and in my case, I’m more the mature bride, not the fresh-faced innocent depicted in country songs.

Last weekend, my father ended up considering a pretty obscure Sonny & Cher song of all things (well, mostly a Cher song on a S&C album), a song called “Turn Around,” one I had suggested actually  but not the S&C version which I didn’t even remember. I was trying to find a Harry Belafonte version (he wrote it) and found many other recorded versions by Kenny Loggins, Rosemary Clooney, Danny Kaye,  and the soundtrack of a famous Kodak ad eons ago. My dad maybe saw the S&C version listed on iTunes – I’m not sure. But I was frankly shocked when he suggested it.