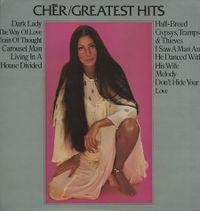 I completely missed my blog posting deadline this week; and I sit here typing out this blog entry on a Saturday while listening to my street's block party on the Fourth of July, everybody having a frolic outside while I sit inside coughing with chest pains and a headache. Fleh!

In the meantime, I've been wanting to post this entry for quite some time. Weeks ago I was very giddy to have been contacted by someone who was on-site for one of Cher's 70s album recordings. Lenny Roberts, her recording engineer, was kind enough to spend a short time answering my many, many questions after his cataract surgery.

Cher fans will remember Lenny credited on just about every Cher Kapp/MCA project of the early to mid 70s. Lenny didn't seem to remember being involved in the Snuff Garrett-produced Warner Bros album Cherished, but he is listed on the back album cover credits.

Anyway, it was thrilling to get some behind the scenes peaks at recording with Cher during that time.

Wow, great interview! The right questions at the right time.
Great job!
Caause I always want to know about those mysterious times.
I think "Train of Thought" is one of the best!

Thank you Mary and Lennie for the interview. Of her 70's tracks released I always loved "Train of Thought" and thought it was her best. I still play it today with much happiness and always LOUD.

Gr8 get on that interview Mary,
thanks for the extra effort

How funny that the mobile truck containing the live Vegas recordings stunk like all the garbage from the entire Sahara Hotel.