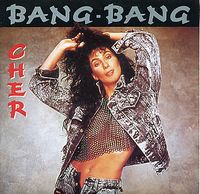 I was born on this day at 7ish in the evening all those 40 years ago. My mother said I made her feet swell up that summer and so she couldn't wear shoes. She also said I cried all night right after I was born.

I'm sure I was cold and probably didn't like my pillow. "Can I get some service around here?"

To the left is what Cher looked like at approximately 40 years of age circa 1986. (not sure when this photo was taken but its around there somewhere). She looks pretty damn good. I do not look this good. But I am hanging in there.

I love 40, honestly, and have been looking forward to it. Strangely I feel like a wise Latina even though I am not Latina. I feel sassy, mischievous, and ready to stir up some fun trouble.

I celebrate my day by reading some quotes from this Cher-loving blog.
http://halfahundred.blogspot.com/2009/07/quotes-from-cher.html

I would F*ck wisdom. 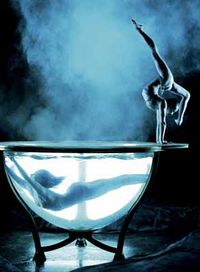 Turns out we had a great time on the trip we dubbed "Gals Gone Mildly Wild." We lounged in a cabana (which came complete with cabana boys) at Mandalay Bay pool, swam in the wave pool and lazy river, ate a swanky dinner at MIX, atop our swanky room at Mandalay’s THEhotel, danced at the MIX nightclub with its awesome views of the strip, shopped, sniffed flowers at the Bellagio, had a toy party, took an iPhone purity test at the Peppermill lounge and saw the Cirque du Soleil show Zumanity.

When I got back, I saw this link posted to the Cher list from Janet Charlton’s Hollywood gossip site: http://www.janetcharltonshollywood.com/not-just-the-same-old-cher/

Cher …she’s psyched herself up so she can return to performing at Caesar’s Palace in September with a splashy new look. She told Bob Mackie she wants a whole new set of stage costumes. She’s tired of everything and wants to update her look. Money is no object. Mackie’s staffers are hard at work creating a new Cher and her fans might be advised to catch her show again.

Alas kids, we’ve been here before…during last year’s break in fact, anticipating Cher’s year 2 changes which amounted to nothing more than two song changes (which were awesome) and one new outfit.

Big disappointment that was and I’m not falling for it again. The hope of changes, that is. I am falling for going to see the show again. I can’t help it. That’s why I’m deemed obsessed. Irrationally giving over of my hard-earned cash to fill Cher’s coffers.

And the pain of my celebrity-obsessed conflict solidified as I watched the burlesque version of Circe du soliel, Zumanity.

Everything about Zumanity was awesome: the sound, the colors, the performers. All of it tugged at your heart and stroked your mind. I felt the same way about Le Reve. And all of this Cirque greatness is what prompted one reviewer of Cher’s show last year to ask if Cher and her people had even seen the other shows?

Because for a comparable price you can go see better aerialists, better stage effects, better comedy 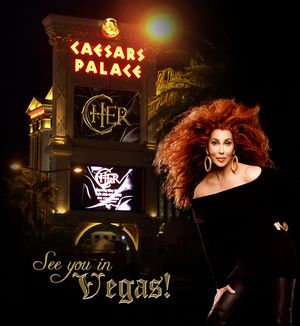 and all pulled together…like buttah! It’s all just so much more creative. Either compete with that or do something completely different.

So if someone asks me if they should see the Cher show, I always say yes. But if they ask me what is the one show they should they see in Las Vegas, I would have to say O or Le Reve or Zumanity.   Especially if they’ve already seen Cher on her Farewell Tour. Because it's practically the same music set.

But I never hesitate to tell them to get ahold of a bootleg copy of Celebration at Caesars.

To thank the lovely ladies who traveled to my bachelorette party in Vegas (from Los Angeles, St. Louis and Cleveland), I sent them this kewl card from the Cher style website.

Although I have recently expressed frustration about Cher's Vegas show and its creative limits, I do also appreciate a kick-ass piece of Cher gossip when it comes along. And stories like these are what I love about Cher (what I love other than the photographs, music albums and TV clips that is).

A post called "Layoffs at Caesar" was submitted recently on the Cher list by Travis Wisdom. He interviewed some people in the Cher Store recently and had this to report :

I went to the Cher store today to return a shirt. While looking around and the few things that were available for sale- most is Bette's stuff- I started talking to the sales clerk. She said a couple of things I would cher. First, volume two of the program will be available at the end of the year. Second, she said that periodically Cher will visit the store and last year came by three nights in a row with her sister and her mother. Finally, the woman said that there were layoffs scheduled for the representatives at the Cher/Bette store and when getting word of the cuts, Cher put a stop to it! The woman said that Cher is now paying for them to keep their jobs! She also mentioned that for the shows that were canceled at he request she paid for the lost wages of the people who would have worked that night (Celine also had done that as well). No mention on whether or not the Divine Miss M is assisting too....

First of all, I LOVE The idea of Cher walkin around in her own store. And I love that Cher is keeping her

store peeps in business and paying workers through her canceled shows. That …is…freakin awesome (if true)!

In honor of Cher's working class empathy: here are some pics of Cher playing the part in Silkwood. 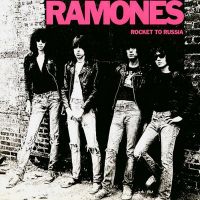 While I spent that last two weeks coughing, sleeping in delirium and getting more and more depressed about the money I'm losing being off sick from work, I heard the Ramones' song "We Want the Airwaves" and I thought it was kind of a shame Cher didn't record with them. I don't know if this was my fever talking, but at the time I thought they would all sound very good together. And what a rebellious thing to do from everyone involved.

And that's been my only semi-deep Cher thought over the last two weeks.

I'm a bit freaked out being so sick so long because a) I don't want prolonged illness to jeopardize a job I love, b) my bachelorette party is quickly approaching (which means there will be no post next week either) and I don't want my illness to ruin it, and c) uh...I'm paying for my wedding -- I need cash and more cash and ever day on the couch brings no cash.

Good wedding news there is, however. We had our rings designed and finished by artist Myrthus Koinva, a new Hopi artist near Keams Canyon, Arizona. And our invitations (designed by by bf and his former greeting-card business partner) are finished and being printed. They are so cool!

Other positive things to focus on: I've finished a few new poems (one inspired by my new discovery of Walt Whitman) and I did get a chance to read the latest Rolling Stone article on Gregg Allman, which was minorly interesting and didn't mention Elijah (who just had a birthday) but did talk about other son Devon and his band Honeytribe and the breakup of his umpteenth marriage where Gregg is finally beginning to wonder: hey, maybe its me. Definitely an inch progress on that front.

But then I come back to work after another day of being sick, I found the office is out of diet coke and I'm now being forced to drink diet Dr. Pepper.

Cher may love Dr. Pepper. But Cher Scholar does not.

Posted at 11:05 AM in Music, Peripherals, What This Really Says About Me | Permalink | Comments (5) 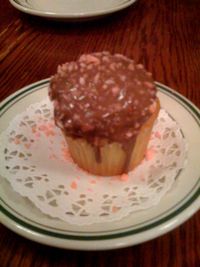 During my convalescence, it cheers me to know someone somewhere is eating a cupcake inspired by Cher.

My friend Coolia took this iPhone picture of The Cher Cupcake and emailed it to me.

This confection is the creation of the pastry genius at The Nickel Diner in downtown Los Angeles: http://www.5cdiner.com/, an eatery located on S. Main Street.

What makes the Cher cupcake Cherlike, you ask?

It has pop rocks in the frosting!

Coolia says it is yummy and that the pop rocks look like sequins.

I hope someday to be well enough to journey to experience this iconic mini-cake myself. I completely missed my blog posting deadline this week; and I sit here typing out this blog entry on a Saturday while listening to my street's block party on the Fourth of July, everybody having a frolic outside while I sit inside coughing with chest pains and a headache. Fleh!

In the meantime, I've been wanting to post this entry for quite some time. Weeks ago I was very giddy to have been contacted by someone who was on-site for one of Cher's 70s album recordings. Lenny Roberts, her recording engineer, was kind enough to spend a short time answering my many, many questions after his cataract surgery.

Cher fans will remember Lenny credited on just about every Cher Kapp/MCA project of the early to mid 70s. Lenny didn't seem to remember being involved in the Snuff Garrett-produced Warner Bros album Cherished, but he is listed on the back album cover credits.

Anyway, it was thrilling to get some behind the scenes peaks at recording with Cher during that time.