Where Cher and I Have Been 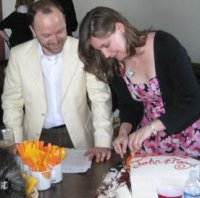 There’s so much news to chat about I think my head will explode. I just had my bridal shower. A beautiful day and at the house of my friend Julia (who I met years ago when I first moved to LA and worked at Agribuys, a now-defunct agribusiness technology company). Her house has awesome harbor and ocean views off the coast of San Pedro. We had fabulous Mexican food made by her husband and played three games-- one trivia game about us that my mother won (I was honestly surprised by that), another game where everybody filled out a list of their likes and dislikes. Then all the women lined up behind the groom and all the men behind the bride and the person with the most in common with each one was deemed their “perfect match.” My bf ended up with a co-worker (who I suspect wasn’t really paying attention to the game and so in confusion never sat down) and I ended up with a childhood friend from Albuquerque. Then we played The Newlywed Game with five couples which included my parents. The last question was “What is the last day of the week you made whoopee.” When it came to me I said emphatically that I was indeed a virgin. My Dad’s card read “What is whoopee?” My parents ended up winning the game. No cards were slammed on spouses heads.

While my parents were in town we also visited Catalina (more quiet and quaint than you’d think on a weekday), Seal Beach for lunch at Walt’s Warf, Pasadena to view some possible wedding program paper, Huntington Library to see The Blue Boy and the HUUGE gardens, and The Charles Lummis House. Talk about a contrast in gardens! The poor Lummis house is dilapidated! He was such a founding part of California history...quite a shame. My parents also helped us planting flowers, and we showed them our future wedding site and talked over wedding favor chocolates we want to get from Wilburs Chocolates, my parents’ local chocolatier.

My most recent opinions on news events:

1. Torture: you can’t be for the sanctity of life and for torture.

2. Susan Boyle: the subtext of this story offends me. To get excited about it presumes that we are so surprised that homely people have talent...when it’s obvious to everyone and their dog that talent comes in all shapes and sizes. So on behalf of all homely, unusual or average looking people, and Susan Boyle,  FU! 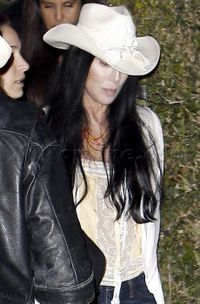 Speaking of pretty people....Cher was at Kate Hudson’s birthday party (in case you live under a rock, Hudson is Goldie Hawn’s daughter).

News items on the Hudson party: 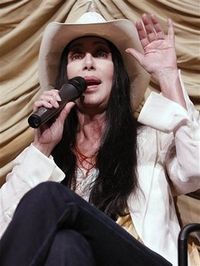 Cher also attended an Norman Jewison tribute in LA and gave good speech. She allegedly also defended her choice of lobbying for Nicholas Cage for his role in Moonstruck.

On a related note, here is a Nicolas Cage Movie Plot Generator: http://2.bp.blogspot.com/_bkFIPLIOGL8/Sd6OQbdcsxI/AAAAAAAAfZU/FKFtOHBxnJI/s1600-h/nicolas-cage-movie-plot-generator.jpg

Is that Kevin Spacey you're marrying? Very handsome....