Cher is Not Sorry 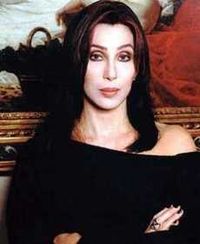 Why do I scan the Internet...err...rather read my daily Cher RSS Yahoo feed and leach off the Cher research of CherGroups posters  :-) ...for news of Cher every week? For blogs like this one, that's why.

Sure, some years I coast by...keeping up with the latest Cher deeds and automatically regurgitating some inane thoughts about them week to week. But then once in a while I get re-engaged in the ever-interesting topic of “what cultural phenomenon is going on with our fascinations and, for some, negative attitudes, about Cher." Deep thoughts is what I mean.

I’m always looking for some Cher Scholarship out there on the wires. Which is why I’m excited about my new Cher Scholar section Expert Corner – two new posts will be going up this week, too. But this blog below was not written by a Cher Scholar;  she's an everyday-Jane-Cher-appreciator nicknamed Pilgrium Soul. And it’s a pretty smart Cher theory she speaks of.

The article begins by talking about her conflicting like and dislike of the movie Moonstruck and its “weird gender issues.” I would love for her to elaborate about this. I suspect there is something to this, and it might be an Italian cultural thing in play. But then she defends her love of Cher (against claims of commercialism, plastic surgery and the silly costumes thing – familiar proclamations of Cher’s lack of seriousness). But she loves Cher anyway. Why? Because...

“Before I knew I was a feminist I knew Cher was not sorry. She was not normal, she was not what people expected and she did not seem to care.”

Cher isn't (publicly) sorry and that's something to chew on. I think this explains a lot about why certain fans have gravitated to her. Fans who, for whatever reason in their lives, have been made to feel or have made themselves feel sorry.

And Pilgrim Soul verifies that this hearkens back her to own childhood of sorryness (as opposed to sorrow) and her own feelings of guilt and sorryness over her self-perceived flaws.

“I grew to love women who grew tired of making apologies for themselves.”

That is so awesome. It reminds me of what an influence my 11th grade English teacher was on me, someone who got married later in life, was having a kid later in life, and had a “why worry” attitude about pretty much everything. She also had a Tyne Daily air about her.  She too wasn’t sorry.
I wanted to be like her. What a life that would be, I thought. Empowered and unapologetic.

I feel like Olympia Dukakis in Moonstruck right now: “That’s it!...No, that’s it!” 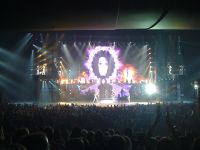 The News: Not surprisingly ticket sales are down all over town: http://www.thewrap.com/article/2770

Among Vegas’ woes: Danny Gans died unexpectedly at 52 last week, stories have been simmering that Bette Midler sales are down, Elton John just left town, and the fact that Vegas is reportedly the most hard hit US city in the current recession.

Interesting to note: Elton’s show made $125 million and shows were filled at 95% capacity. Celine Dion beat him earning $400 million from 717 shows. Midler has been playing to 78% capacity in comparison. No word on Cher’s seat numbers. But Cher and Midler allegedly have cut ticket prices 9 % across all price points. Bette’s new bottom price of $45.45 and she’s also offering upgrade programs for locals and customers of Travelzoo.com. It’s also interesting to learn that Barry Manilow had the highest ticket price of any performer in the US last year? And his tickets are now more expensive than last year. Now I’m a Barry fan but…wtf?

The Rumor: Cher to end her Vegas run early

This false bit of gossip frenzy got a few fans buying tickets to Vegas last week, fans who had been procrastinatin.

One smart Cher-groups fan smartly did the math on the rumor:

“Well she'd better hurry if she plans on finishing this year…the 2008 shows plus what's presently scheduled through December 2009 only makes a total of 114 shows!”

Where did the misinformation come from? Was it a cynical ploy to boost ticket sales or someone’s misreading of the latest Cher press release on the final 2009 show dates? Who knows.

The record was set straight on Cher World: http://www.cherworld.com/news/?p=748

The FCC Story That Would Not Die 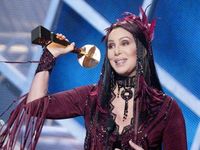 I need to rephrase that: this is the boring story that would not die. Cher swore on TV. First it wasn’t okay; then it was okay; now it’s not okay again. I’ve culled the pertinent details (in my estimation anyway) from the USA Today story by Joan Biskupic:


“A Supreme Court ruling Tuesday that upholds a prohibition of expletive outbursts on broadcast originated with a case over an appearance by Cher at the 2002 Fox Billboard Music Awards show in Las Vegas.”

“A divided Supreme Court on Tuesday upheld a federal prohibition on the one-time use of expletives in a case arising partly from an expletive uttered by Cher at a Billboard Music Awards show in 2002. The ruling, by a 5-4 vote and written by Justice Antonin Scalia, endorsed a Bush administration Federal Communications Commission policy against isolated outbursts of, as Scalia said from the bench, the "f-word" and "s-word." The ruling does not resolve a lingering First Amendment challenge to the 2004 policy that is likely to be subject to further lower court proceedings. Tuesday's decision reversed a ruling by the U.S. Court of Appeals for the 2nd Circuit that had said the FCC's decision to sanction "fleeting expletives" was arbitrary and capricious under federal law.

[I hear “fleeting expletives” and I think of a cartoon of a sprinting “foul” word.]

That lower court had agreed with Fox Television Stations, which broadcast the Billboard awards, that such isolated utterances are not as potentially harmful to viewers as are other uses of sexual and excretory expressions long deemed "indecent" and banned by federal regulators. Dissenting were liberal Justices John Paul Stevens, David Souter, Ruth Bader Ginsburg and Stephen Breyer. In a statement by Breyer, signed by the others, they said the FCC "failed adequately to explain why it changed its indecency policy from a policy permitting a single 'fleeting use' of an expletive, to a policy that made no such exception."

The policy dispute had been shrouded by partisan differences and moral overtones of what is best for young viewers.

Continue reading "The FCC Story That Would Not Die" »

For quite some time there has been a ton of links clogging up my blog to-do list. I’m just gonna throw them all up here now just so I can move on with my life. You can link wherever strikes your fancy. My take for must see items have a star (or two) next to them.