My Divas Book of Essays 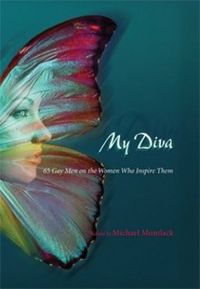 There's a new book out called "My Divas" and it's a large collection of short essays by gay men ruminating about the famous women who inspire them.

The only writer I recognized was the poet Mark Doty who talks about writer Grace Paley. Mark was a prominent poet figure while I was in graduate school at Sarah Lawrence in the mid-90s and was very popular and well-liked. I've seen him read a few times at the LA Book Festival - in what I have dubbed the "poetry nook." He's a very funny poet and an astute critic of poetry at the Book Festival's poetry panels.

But anyway, such fine divas as Cher, Bette, Ava Gardner, Jessica Lange and Tina Turner are discussed. But there are many, many more divas included and the essays are short – about 5-10 pages.

Poet Aaron Smith (who wrote "Blue on Blue Ground") wrote the essay on Cher. I wonder if he has any Cher poems. I’ll try to find out. Anyway, his essay was more of a brief personal diary of his most memorable Cher moments. It didn’t delve into characteristics of Cher specifically.

The book's jacket however does provide some illumination on why divas are so sticky with devoted fans...because they pose as simultaneously: “sister, alter ego, fairy godmother [that one seems important], and model for survival” for not only gay men by for "anyone who ever needed a muse" and that these women represent both "vindication and transcendence" and can be “where we find our courage.”

So, some interesting theories to chew on. I’d like to read more about evidence of vindication and what that might mean. A good review can be found here: