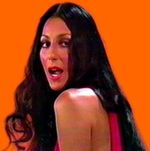 More news on Cher's interest in the movie Burlesque
http://www.myparkmag.co.uk/articles/celebrity/cher/cher-ready-for-burlesque.html

“reportedly based on Bob Fosse's iconic musical 'Cabaret' - was written by Pussycat Dolls producer Steven Antin, who will also direct the project. It will be produced by Donald De Line, who previously worked on 'I Love You, Man'. Filming will start in September and the movie is due for release late next year.”

News reports are again jumping the gun saying Cher has been cast -- but stay tuned.

But Movies to Cher, call me!
http://popwatch.ew.com/popwatch/2009/05/movies-to-cher.html

That's the tune of this very funny Popwatch’s analysis:

"the film will tell the story of a small-town girl (Aguilera) who gets in touch with her inner hussy with the help of the owner of a strip -- ahem, burlesque -- club, played by Cher. My only problem with this casting is that they didn't just dump Aguilera and have Cher play all the parts (something tells me Michael Slezak would agree...). But barring that, I'm just excited to have Cher back on the big screen in what could be her first real role since 2003's Stuck On You (unless Johnny Knoxville's The Drop-Out makes it to theaters first).

And really, would it be unreasonable of me to hope that the movie will be book-ended by an updated version of the "Vamp" song from the Sonny & Cher Show? I mean, it would fit the theme so perfectly.... "Stuck in a nowhere town/Thought she didn't have a choice/until the day that she discovered/Little Stina had a big old voice!"

They had me at hello with this one.