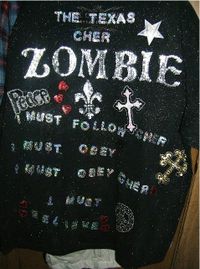 We've made a lot of wedding planning progress over the weekend. My bf and I met with the caterer about our food options--I was looking for some warm comfort foods like soups and squashes seeing as our event will take place in an old library in the fall. We also found a do-able rehearsal dinner space (which has been vexing us--our favorite Mexican restaurant was too ho-hum about hosting a smaller party so we switched to a chain place--not ideal for food but should work well). And my friends Julie and Christopher and I found a great dress for my Maid of Honor on Monday--although we still might keep looking around. I also went thrift shopping with my friend Natalie and found some nifty trinkets to display on the old library shelves.

But now I really want to talk to you about a serious topic.

Earlier this year on the Cher list someone was getting their usual verbal ass-kicking for daring to criticize her new show. This happens all the time, whenever anyone expresses dismay at a Cher activity or product, be it the auction, the new show, the false stops on the farewell--even folks who have build shrines to her on other days will get sold for scrap on the day they say something negative about Cher. I wrote a letter back sympathizing with both sides (as an artist it sucks to be second-guessed all the time but as a consumer you need to have judgments in order to sort out your world). But I stated that becoming a obsessive loyalist would not make you a fan but a Cher Zombie (and fanatical danger to your society).

This phrase was taken up humorously as a badge of honor by both sympathizers to my point and those who disagreed with me. A few on the list started signing their posts Cher Zombie including "the Texas Cher fan" Terry Stout (is there only one Texas fan?) Terry also started a more adult-content Cher fan list called Cher Zombies.

Now he’s gone and made this awesome shirt which cost him over $500 for rhinestones and letterings. He said it weighs a ton.

I really hope Cher Zombies takes off like Betteheads and Parrotheads.

(btw, I went to a Jimmy Buffet show last week and again this one of the most violent party concerts I’ve ever been to outside of mosh pits--a dangerous drunk happy mob!)