Cher to Fireman: Call Me 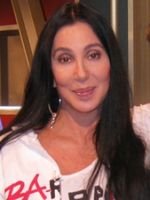 Apparently, emergency services were called to Cher's home in Malibu when someone testing her alarm system accidentally activated it.

A spokesperson for the Los Angeles County Fire Department confirmed to Access Hollywood that they were called to Cher's home on Tuesday after the panic alarm/medic alert button was pushed in error. "The alarm was set off at 11:16 AM and Sheriffs and paramedics responded," the spokesperson told Access.

But Cher’s publicist Liz Smith said "It was a false alarm but [Cher] said she never saw so many cute firemen and paramedics in her life," the rep told Access. "She added there was an especially gorgeous black haired ambulance driver that she is really sorry she didn't get to meet. Maybe there'll be another false alarm."

When emergency crews scramble to a celebrity’s home and it turns out to be a false alarm, journalists don’t usually write about it.

Especially since most Americans don’t even remember who she is…right Fox News?