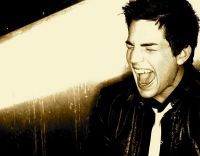 You may have heard that Adam Lambert did not win American Idol last night. He came in second to the very likable Kris Allen. However, Adam remains the blazing star of the show, even in Kris’ estimation.

See? That’s how nice Kris is.

Time Magazine recently published an article about how Idol has produced many singers who can sing perfectly pleasant songs, but Adam is idol’s very first star. In fact, they called him the Un-Idol.

Adam has a kind of Cher-like quality about him, not just because he blew “Believe” out of the water during Hollywood week. The guy is just full throttle and there’s this sense of fulfilled theatrical promise about him. He was strategically polished for an Idol contestant, which made him an almost unfair competitor in this decidedly amateur show. His versatility was engaging. He could do soul, alt-country, torch and then fire his pipes like an 80s glam rocker, a reincarnated Freddie Mercury.

But I think in some sense he was my fantasy of what fully-fulfilled Cher singer could be – had she embraced a 100% torch theatricality that the splendid Sonny & Cher Comedy Hour solos only hinted at.

This article by Mary Zeiher catalogs his key performances on the show (including a slam on Cher’s performance of "Believe").

“Adam Lambert American Idol performance #2: Remember in Hollywood Week when he sang Cher's "Believe"? When I heard what he was going to sing, I immediately thought "Oh, we are done with Adam Lambert. No one can do that song well. Cher doesn't even do that song well." But again he out-shone the competition.”

I actually disagree with her assessment and think although I don't love the song, Cher does as well as anyone with it.

If he doesn't win American Idol, Midler doesn't think it means homophobia has reared its ugly, discriminatory head. "Don't take it as a slap in the face if you're a gay person," she said. "I pray that people don't get pissed off."

(Well, Adam did really well in this year's Idol competition so I don’t see evidence of widespread homophobia in American voters, who are every day skewing more tolerant in national polls on gay issues. I guess Family First-types could be behind all the Kris votes... but man, what a pathetic waste of time that would be, dudes.)

"I saw her show, and it was unbelievable," Midler gushes. "It was absolutely terrific. I had a great time. She looked great, sounded great and gave it her all. And I got a photograph with her, so I'm happy."

Is she fer real?

Superstar pop-singers or any
other kind of singer/musicians... are suppose to work and earn their way to the top.
NOT have it handed to them
first on a silver Hollywood platter, while lazy, bored
prime-time tv viewers sit on their spoiled butts and vote as to whether or not this one or that one should become a "STAR."

that is not the way it works!

"Stars" are suppose to start out at the bottom and work their way up the fame ladder.
american idol is an insult to the true and real "Stars"
whom had to go through years of hard work to end up where they did:

Sonny Bono driving around in a meat delivery truck and
stopping at record studios trying to get someone to give him a chance.

Sonny&Cher playing to 2 drunks night after night trying to get another chance.

Reba McEntyre driving in a
car around Oklahoma and Texas with her stage equipment being pulled behind her in a horse trailer.

Loretta Lynn leaving her children behind and driving across the US in an old car.
making bologna sandwiches and stopping at every country radio station in site with her song on a demo record.

Others like The Supremes and
The Blue Bells driving around in cars and old buses
to perform- but having to urinate on the side of the road and/or wash up in roadside
toliets because they weren't allowed to use the facilities of the places where they performed.

Maybe my satistics could be off on some of this, but i think you get my meaning.

You start out in bowling alleys and the local town fairs, Not a state-of-the-art stage with all the amenities being handed to
you to make it perfect.

american idol is one more example of the demise of Hollywood and the Glory of
having the experience of being a FAN of the true
STARS....

I would have to respectfully disagree in this case, JD.

AI has never purported to be anything but what it is...an amateur competition for kids...a tradition that has been going back to vaudville times. As for becoming famous overnight, I just rewatched the Farrah Farrah documentary and she herself was discovered "overnight" by a publicist. Happens all the time (may not be the healthiest was to become famous)-many stars skip the pavement pounding stage...

Secondly, Adam Lambert has been pounding the LA pavement for years doing local theater (was in Redondo Beach Theater's production of Evita) and his own cabaret shows...see youtube for some awesome examples of what he's done: http://www.youtube.com/watch?v=Q_zHjeqQ05o

(I'm such a shameless fan!)

its not Adam Lambert i have a dis-liking for. don't know anything about him to begin with.

it's the American Idol tv program i dis-like. it's like a factory, where its
assembly-lines churn out the newest DISPOSABLE diva
superstar to be purchased at your local wal-mart.
a new one almost every other week for your buying
pleasure..

and Farrah did not go from a publicist straight to Charlie's Angels and a million-selling poster. or did she?
do you have one of those posters?
did they mention cher in the farrah documentary?

The didn't mention the Cher connection to the German doctors in the doc. They did say Farrah was discovered overnight by a publicist, which lead to popular commercials right into Charlie's Angles. LA Magazine also ran an article on her this month - (not too favorable) where they faulted her possibly too swift-stardom as a comon symptom in many celebrity's hardships in dealing with fame.

My brother had the poster, allegedly when he was about 13 and my mother made him get rid of it!! She let him keep his Jennifer Beals poster a few years later.

MY brother had the farrah poster. i had the jaclyn smith poster. never got around to buying the kate jackson poster. truth be told, she (kate) was my favorite.
had more substance as an actor.
you know, maybe farrah's going into fame so fast was a bad thing.
she seemed to flounder after the tv show.

I remember this line of
specialty line of greeting cards in San Francisco.
they had real photgraphs of
the cher doll and the farrah
doll in various poses around
the city.
my fav was the two of them
cuming out of the market st Safeway store across from
our lady of safeway chruch.
they have baskets on their arms and in them are things like Cheetos.
im listening to Helen Reddy.
remember her?
mary, it would be cool to do a timeline of how Cher was in and out of the lives of other divas at various times during their early careers. like tanya, dolly, kate, tina. and how they all used the same production people.

i was watching Stevie at red rocks last nite and
it starts out with the jet air-plane shot, just like in Cher at the mirage. the same footage.

and what about resveratrol?

Just a quick response to state that I saw the show Bette gave her quote on (ITV's Loose Women in the UK) and Cher came up in conversation by one of the panelists and I don't think slagging off Cher would have done her any favours - Midler was surfing the adulation and obviously her own face is also pulled too tight so wasn't about to stop smiling for Cher.

On another note, I just wish to say how invaluable your site has been to igniting my interest of Stars into borderline obsession - it's totally re-defined my emotional connection to her if that makes sense. The write up you gave Taxi Taxi took my breath away - those words were pure visuals.