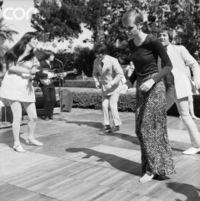 Like in the 60s and 70s, Cher has been spotted dancing.

"Cher Still Making ‘Em Weep!: And in real royalty news, pop queen Cher caused quite a stir Saturday night at the LIV nightclub in Miami – she even made the some of the crowd turn on the waterworks. “Nobody knew Cher was coming, but when she walked in, a group of female fans started hysterically crying… everyone recognized he,” a club source told the New York Post’s Page Six. But Cher didn’t let the fan frenzy stop her night. “[She] didn’t let 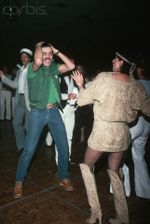 any of it faze her,” a source said. “She was dancing all night and was so nice to all her fans.”

The story was also reported in the Miami New Times.

Cher was also spottedwith her bf at a Merle Haggard/Kris Kristofferson concert in Santa Rosa, California (Cher with Kristofferson below).

I was excited about this at first, thinking it would portend to the eventuality of a country western 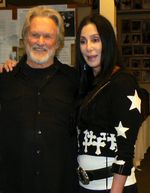 album from Cher or a little ole western-flavored song on a Cher album. But alas, reports are that her boyfriend is the fan.

My own bf just downloaded a slew of country western songs for me a week ago, in between my own downloads of country-kitche. So Merle Haggard’s "Mama Tried" is bumping up against Barbara Mandrell’s "Sleeping Single in a Double Bed."

By the way, as I was groaning to my bf about his love of the Chiefs and the movie Heat, he had to remind me he’s been to two Cher shows (I have a feeling this will develop as a weapon in many future kerfluffles) and he doesn’t want to hear my anti-Heat whining every time the endless and posturing melodrama comes on, which is practically daily on TNT! – see…there I go again.

This being supportive thing is really hard.

I did agree to go to a Chiefs game. Sigh.

By the way, my furkid Franz was a winner last week. Won himself a free week at the spa (...er kennel) and a March Madness jersey of his choice. He picked the Jayhawks in solidarity with his papa.

one night in the late seventies i was dancing at studio one. i don't remember the song or my dance partner. i do remember every eye on the dance floor on me. i thought "john, you must look hot tonight with dance moves to match". i turned to the right and holy shit it's cher. she danced just the one song. i was on a cher high for days. it was one of my favorite cher encounters.
at about that same time, one of my favoite beer bars played that barbara mandrell song. it was my first introduction to country music. i love that song.

OMG Mary If You go to a Chiefs game then ur fiance has to go to every CHER event u attend from now on. But the Chiefs are trying to make a come back god bless their loosing hearts. I wish them well and wish they were as resilient as CHER is. BTW
Rock Chaulk Jayhawk, GO KU!!!!