Cher is a Proud Armenian 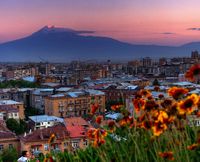 "You know how you can tell an Armenian? Their name rhymes with Armenian."

And it seems to be true. But on a serious note, what few people know about Cher is that, on her father’s side, her family was Armenian genocide refugees. They survived a World War I era genocide that 1 million other Armenians did not.

This week this note about a Cher interview on Armenian Dish Network TV appeared on the Cher news RSS feeds:

I'm wondering if this is the interview by Lusine Shahbazyan (hey, rhymes with Armenian) re-broadcast from one taped in the spring of 2008 for her Discovery show, the same one detailed in this 2008 Cher cover story in The Armenian Reporter: http://reporter.am/pdfs/C0216.pdf

I really enjoyed this interview written by Paul Chaderjian (again! rhymes with Armenian). Just being a bit worn out with the usual press questions asked of Cher these days, it was good to get something more focused on her heritage.

The articles shows pictures of her 1993 trip to Armenia, the same one covered in People Magazine by Susan Cheever, daughter of John Cheever. Cher traveled with The United Armenian Fund organization on a DC-8 plane full of humanitarian aid. She visited an orphanage, met with president Levon Ter-Petrosyan, and spoke in front of 1,000 students at Yerevan University among other things on a three day trip. What did she talk about to the president? The book "The Fourty Days of Musa Dagh." Cher also visited Echmiadzin, an Armenian Orthodox Church and gardens built AD 301 where she learned to cut Armenian stone.

Cher said the plane was rickety and they had to bring own food. She described the city of Yerevan as barren with impassable roads. Armenians told her to please tell America of their plight andCher replied regretfully, “Nobody in America would care.”

Yerevan was once a prosperous city; but in the late 80s it had been taken down by an earthquake,the economic collapse of the Soviet Union, and a war with neighboring Azerbaijan (who had blockaded their borders). They were suffering 85% unemployment at the time, had sporadic electric power, and were starving due to high food costs.

Cher also reportedly visited Ankara in an effort to help lift one of the blockades. She said she felt proud to see Armenian strength and resilience in the face of having nothing.

The articles was also interesting in that it depicted the drama of doing a celebrity interview, from initial inquiry calls to the waiting room before the interview, all in minute detail – and with plenty of name dropping. To steal a security metaphor used at a Culver City party I went to this week: it felt like trying to get through a video game.

But I did enjoy hearing veteran reporters describe Cher with affable and adoring accolades. For instance, Michelle Emard said “in every conceivable way, Cher is imitable.”

They all said she was remarkably "down to earth."

The article also fills in more detail on Cher's relationships with her father's family. Her father is 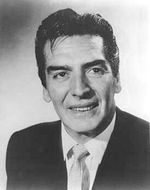 named Garabed Sarkisaian (vs. John) in the article and Cher said she once had a crush on Victor Mature (pictured right) who looked like him. Cher said her Father (pictured below Victor) went on tour with S&C in the earliest days and that she did reconcile with him after their falling out, on his death bed in 1985 before he passed away of cancer. She said he had been living in Santa Barbara breeding Arabian horses.

Cher says his family lived in Fresno and she tells the reporter that she did go to grammer school in Frenso but not high school there. (Tracking Cher’s course through the Los Angeles school system takes forensic skill it’s so complicated) Cher talks about her grandmothers on both sides and how her Armenian grandma taught her to make Armenian foods sarma, kofta. 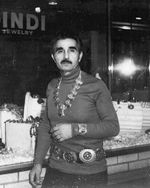 There are also breakout boxes that are little Cher essays: one on character that reads li ke a cranky  "kids-today" piece  (although I don't completly disagree with it) and another moving one on American soldiers, doctors and nurses.

The article claims that Cher's natural hair is an Armenian black and they comment on her "soulful Armenian eyes." True be dat.

Here's another good retelling of Cher's 1993 trip to Armenia:
http://www.cilicia.com/armo_article_cherarmeniatrip.html

He is a good friend that speaks well of us behind our backs.