Poem of the Week
Chastity Turns 40

CherScholar.com has a new section: Expert Corner -- more details at the end of this post!

My question is about Cher's wigs. I do consider myself a huge fan, but something that friends sometimes ask me about is her wigs, and I don't know very much at all. I really really find it difficult to tell with wigs… No matter how hard I look, I simply just can't tell if they're wigs or not.

Cher and wigs: complicated, in a word.

I'm not a 100% expert on Cher wigs but I can muddle through some of the mysteries.

Hair history: I think technically Cher's hair is that variety of dark, dark brown that looks black. It's very Armenian. When I watch Armenian TV shows (on some cable channel I keep coming across), I notice that even the nape of Cher's neck (as seen in the 1974 S&C Greatest Hits photo) is very Armenian, hair way down the nape of the neck. Anyway, she primarily wore her own very long hair (as seen on all those 60s and 70s album covers, growing her bangs out at the end of the 60s) up through end of 1978/beg of 1979 when she cut it short for the first dramatic time, like Kate Jackson style. You can see this hairdo inside the 1979 People magazine issue -- was it more shocking to see Cher in short feathered hair or see her needlepointing again? It was all very shocking to me as a nine year old. 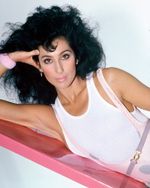 Also you can see her new hairdo on the Michael Douglas Show of 1979. But on TV, out on the town with Gene Simmons, and on stage, she wore wigs - I don't think she liked her short hair much.

It grew out a bit to a sort of a shoulder-length shag during her Black Rose appearances. It grew out all through the early 80s (longer shag during Silkwood) until she had to recut it again during the filming of Mask due to damage done coloring it. You can see that short hairdo - all blonde, or with the black streak down the middle -- in magazine pics circa 1985/6. It's been growing back out ever since (I think) and is now long again.

Cher started wearing wigs during the S&C Comedy Hour. Her hair was authentic (long) in the opening and closing segments but for the skits it was too complicated to comb and style it for every costume. Wigs were easier and more versatile. And she's been using the same wig-maker since then!! Which is pretty amazing. No major wig fights between them, we can surmise.

The big curly hairdos around the 80s were also wigs. In videos and onstage. She wore her "real" hair on some talk shows and you could see it in some street scenes of "We All Sleep Alone". She had said all that curling and spraying would have damaged it too much. Wigs were easier.

The front cover of the Believe album is real, at least I "believe" so. That looks like her real hair on her Behind the Music interviews, too.

However, on her “Way of Love” performances during the Believe, Farewell and Vegas shows,  it is not her real hair. Confused yet? You can tell by the part (hard to find) and the ends. Her real hair has uneven ends now. The wigs have perfect ends.

But the perfect ends test is not a 100% true test depending upon the year. It's complicated but the S&C Comedy Hour, she had straggly ends...but her hair was in great shape later on her solo show and the divorced S&C show.  Now her hair is in great shape but not as thick and even as it was in 1977 - Sonny's funeral you can see her real hair...it's thinner and longer than the wig for “Way of Love.”

All my wigged-out theories are speculative and I have no idea how many wigs Cher has. I have heard about this wig room and imagine it’s like Tori Spelling’s mom’s gift wrapping room or Candace Bergen’s father’s Charlie McCarthy room, both places their children fear not to tread.

air hair photos to further push you over the edge), hopefully, the new timeline just posted on Cher Scholar.com will clear things up. I recently put out all call for some scholastic Cher timelines to post. The inaugural timeline by Cher scholar Robrt Pela is a breakdown of cHair-styles through the decades - and it makes much more sense than all that blather above! Go see for yourself:

More outside expertise to come. If you have any timelines you’d like to add, please send em over.

Posted at 11:39 AM in I Am Not My Hair (Inner Beauty), Questions to Cher Scholar, Scholarship In Action | Permalink | Comments (7)

Cher's hair is naturally brown and she has been dying it all these many years. I read this a long long time ago when I was little in a booklet all dedicated to how CHER achieves her look. She also under went a lot of that painful perm. hair removal processs called, Electrolysis to shape her hair line into a widows peak and had her arm pitts done as well, so she never has to shave her under arms (TMI?) She cut her hair right before she appeared on that week as co-host on the Mike Douglas show because she had permed it and after a while that causes major damage. Everytime CHER performs or appears in public she wears wigs except in her private life. But if she let her hair go she would indeed have greying hair but since she is in the habit of dying it black all the time it never shows.

Question for Cher Scholars out there- In dressing style, is Beyonce the new Cher?

I've definitely heard people say that a time or two. Speaking for myself, I'm not enuff of a Beyonce scholar to know for sure.

while there is and can never be another CHER, I do see some of CHER's style displayed in Beyonce, but she has gone a step further with it and has her own clothing line designed by her mother.

Anyway, she primarily wore her own very long hair up through end of 1978/beg of 1979 when she cut it short for the first dramatic time, I like Kate Jackson style.

Cher names her wigs. For example on this - http://www.youtube.com/watch?v=R44wrj0lbFs - Letterman interview, she discusses the wig-wearing and that the blonde wig she is wearing is called "Meg". Lovely!

Cher is one of the influential people in the world of fashion. She's one of the reasons why wigs have become popular. It's not all the time you can cut your hair, dye, or even have hair extension just to be fashionable. Wigs are tools that give you freedom to explore the different fashion statements.