V.A. Employees Would Do Cher 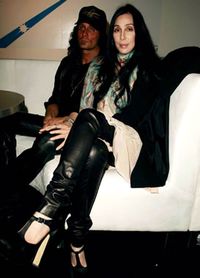 My bf came home last night with a very exciting straw poll undertaken casually yesterday at his place of employment, the benefits division of Veterans Affairs.

My bf did not take part in the poll, only overheard it and mentally noted the results.

One male V.A. Benefits employee asked five others in a casual group (mixed age range between 25-45) if they would “do Cher.”

A whopping five of the six said they indeed would do Cher if so given an opportunity. My bf later claimed to me that he would as well, making the tally six of seven VA Benefits males between the ages of 25-45 who would welcome an opportunity to have sex with Cher.

I’m assuming my bf was being honest, as that kind of admission might have ended our discourse on the poll results very badly...if I had tended to be a more clinically touchy female.

Is this because they are getting paid to provide services for Veterans, and consider she to be a veteran? Just struck me as funny.

And I want to add that not one of the seven V.A. Employees made this remark..."now tell me who Cher is again..." Strangely, they all seemed to remember who she was.

1. i FIND it in EXTREMELY
bad taste to have such a sinful display of manly animal NEEDS displayed concerning "our fair CHER."
I mean for god-sakes...The woman does not even have to go the "bathroom" like the rest of us...

Jimmydean
ps... im greiving because NATE died and the whole GD
5th season of 6FEET has totally spun out of control.... yes, im behind the times... never had cable...