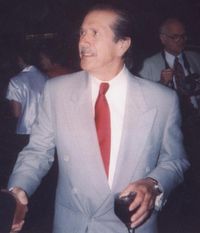 To begin with I must say I feel a tad creepy discussing this subject. And not just for that fact that I have no idea what I’m talking about. Usually I’m fine with talking out my ass. But this rumor ranks high on the sad and creepy meter all on its own and I would rather not go there.

Unfortunately, everyone is asking me about it this week. So here goes.

This is actually a relatively old story – the version I just read appeared in April of last year in a very mainstream Australian newspaper:

Why has it taken so long to get on the radar of Americans...if it’s such a credible story (argument 1).

This is the jist of it:

SONNY Bono, former husband and singing partner of superstar Cher, was clubbed to death by hit men on the orders of drug and weapons dealers who feared he was going to expose them, a former FBI agent claims.

Private investigatorand former FBI agent Ted Gunderson (why can’t I get Fargo out of my head now?) (http://en.wikipedia.org/wiki/Ted_Gunderson) is the one who put forth this theory ... to the Globe tabloid. So that should tell you something right there (2). It's still just a tabloid story at this point. Brief searches on Ted Gunderson brought up battles he’s had with late-night paranormal-themed radio show host Art Bell. We're still in tabloid zone here.

But all that aside, let's think through what could have happened? It’s said Sonny was an experienced skier; but he was also allegedly addicted to pain killers. It’s possible he was impaired by painkillers and had a skiing accident, although online reports of autopsy deny there were any substances in his system.

What’s true and what’s not? I’m not a criminologist. I’m not even a Sonny scholar. More just a plain old Sonny student. But still...

Although I didn’t follow his congressional career closely, I didn't think his big issues were drugs and weapons dealing (4).  My understanding was his personal issues were trying to save Palm Springs' Salton Sea and the extension of copyright lengths, a bill that passed and became known as the Sonny Bono Copyright Term Extension Act.

He was on the national security and judiciary committees, where he dealt with immigration, trade and crime legislation. But larger perspective people: he served under two full terms  and so it's hard to believe he would have earned enough power and influence to be a target, especially in comparison to more senior Republican congressmen who were more outspoken on those issues...or any other celebrity congressmen who might have been targets for their positions on drugs and weapons. So it’s hard to see Sonny Bono as a big target for assassination (5).

And we’re also talking about a huge cover-up of an assassination in a public space. It would be hard to clean up so much possible evidence (6)...hit men ski tracks everywhere, witnesses seeing hit men skim Sonny off the trail. I’m no criminologist as I said, but I have watched plenty of episodes of First 48 (Go Memphis!). Drug dealers are assassinating  people in Miami all the time on that show and they leave tracks in park grass.

So there are my 6 reasons to doubt the story. Not that I’m saying I know for a fact it isn't true. Far be it from me to understand the darkest corners of my governmental dramas with drug and weapon’s lords. Maybe Traffic the movie part 2 can connect the sordid dots I find to be missing with the story so far.