Cher mentions around the Net

Headline: Nicolas Cage grateful to Cher for his Hollywood stardom

My bf was flipping channels and came across Moonstruck the other day and he asked me how the hell Nicholas Cage was miscast in it. I blamed Cher. Bf suggested someone older and more road-weary would have been better. I replied that I agreed but that Moonstruck gave him his break into the "big leagues."

Nicolas Cage says that he is indebted to Cher for helping him become a Hollywood star. The ‘City Of Angels’ star has said that he is thankful to the singer-cum-actress because she fought to land him a role alongside her in the Oscar-winning movie ‘Moonstruck’.

Studio bosses were not very keen on casting the then-23-year-old Cage as Cher’s love interest in the film.  But it was the ‘Believe’ singer who dug her heels in, and landed him the part of New York baker Ronny Cammareri.

The movie won Cher a Best Actress Oscar, and made Cage an overnight sensation in Hollywood and the actor is eternally grateful. “She really was a champion for me. At a time when people didn’t see me as a romantic actor, she fought for me,” Contactmusic quoted Cage as saying. (ANI) 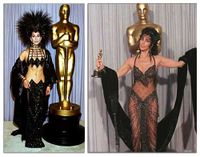 Neither are outfits for the faint-hearted, but what if you HAD to wear one of them - or die? Which one would you choose?

The outfit on the left may look initially more frightening, but the one on the right reveals much more skin. Just to level out the playing field a little, we're going to allow you to ditch the hat/wig/whatever the hell that thing is shown in picture one. Don't say we're not good to you.
What's it going to be, then, readers: which outfit will you wear - or die!


Celine met with Caesars Palace and AEG/Concerts West executives, watched Cher’s show and then went back to her own former dressing room to meet her successor on Feb. 25. Celine’s team wouldn’t confirm or deny my questions about the reported pregnancy but did send the Cher photo for us to run on Vegas DeLuxe.

A star-studded finale for Cher: Cher ended her current run of sell-out shows at The Colosseum in Caesars Palace in grand finale style -- even co-resident headliner Bette Midler, who starts her next series of shows there Tuesday, attended Cher’s performance! That was the first time one had seen the other’s show, but I don’t hear that Cher is staying on to watch Bette this time around!

After Cher’s performance, actress Vivica A. Fox went backstage for a meet and greet! Also attending separately were fashion designer Michael Kors and lovebirds Nicky Hilton and boyfriend Jeffrey Katzenberg. Cher resumes her next series of shows April 25 for one month. 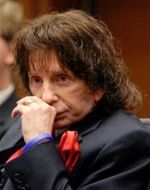 Not a Cher mention here, but it is news of a peripheral character: the second Phil Spector trial has been going on recently in LA. Closing arguments take place this week. Jury expected to deliberate soon.

Nancy Griffin Talks More About Hangin Out with Cher

Same story of the time Griffin was introduced to Cher by Rosie but retold:

Toward the end of her 7 p.m. show at Ruth Eckerd Saturday night, Kathy Griffin told a long, funny and rather mind-boggling anecdote about spending her birthday with Cher — freakin’ Cher! — at the star’s mega-mansion in Malibu. How did D-lister Kathy Griffin wind up chatting for five hours over birthday cake in freakin’ Cher’s football-field-sized bedroom suite? Because Rosie O’Donnell introduced them, and Cher told Rosie she thought Griffin was “a smart, funny chick” who it’d be fun to hang out with.

Which kind of sums up the increasingly paradoxical nature of Kathy Griffin’s D-list persona: She does seem like a smart, funny chick who it would be fun to hang out with — but now she hangs out with Rosie and freakin’ Cher! …

Griffin is also a surprisingly good mimic (except for her Cher, which she admits is crap). And the energy is non-stop breathless amazing – close to 90 minutes without a break, and this was only the first of the night’s two shows. The adoration of the crowd helped, and she’d done her homework, thanking her “Tampa upscale gays” for crossing the bridge, and taking special note of the “Scientology Hotel” gala happening the same night in downtown Clearwater. (“We’re having way more fun than the Scientologists. What are they doing? Untying each other’s antennae?”)  …

But you still gotta wonder: What did she and Cher talk about for five hours? 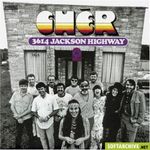 Visit of the birthplace of the Muscle Shoals musical style

In 1969, Cher released her album 3614 Jackson Highway, the address of the Muscle Shoals Sound Studio where the record was cut. Although that was almost 40 years ago, Cher fans still show up to have photographs made in front of the unglamorous building, imitating Cher's album cover pose.