Cher mentions around the Net
Plea for a Cher Hit 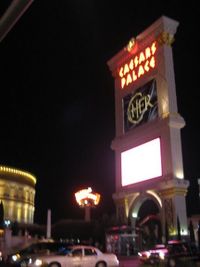 Again, I had a good deal of fun seeing Cher live in Las Vegas a few Saturday’s ago. Her energy level seemed high and I felt and the crowd was very engaged.

I can always get a good look at the crowd from my last row seat of the orchestra floor which is the best I can ever afford.

This energy level was interesting considering everyone in the audience was older -- way older -– than us. Me and my bf are 40/43 and we were the youngest people we saw all night until we moseyed on over to Pink Taco at the Hard Rock where we suddenly became the oldest people in the place. Suddenly Vegas felt very segregated.
But the oldies at the Cher show were cheerful and active all night. It was the same show for the most part. No major refurbishments  (as there hasn’t been musically since 1999). There was the addition of “Love Hurts” swapped in for “The Way of Love” which was most appreciated. It was awesome in fact. She did a long American-Idol-length note at the end - really swell to hear. (I seriously love the sound in that joint.)

Cher also added “Let the Good Times Roll”, the aforementioned Caesar and Cleo song, not my favorite song and one she introduced with many disclaimers about inconsistencies in her performing; but she pulled it off nonetheless. It sounded much better than the Internet clip I'd seen.

She seemed to be having trouble with her voice all night, constantly drinking water and touching her throat; but I could only tell one moment where she cracked up a bit. The sound never dropped out.

The bf (who has broken a record here by being the only bf to attend two Cher concerts with me, and four Cher events if you include a Cher Convention dinner in LA and a San Diego’s Gay Men's Chorus Cher revue) said he felt the show was overall much tighter this year and that the acrobatics had been taken  up a notch. And the acrobats had been...a notch. I felt the dancing was a little bit more synchronized. But I also wondered if that was my imagination or wishful thinking.

I sincerely loved the backup singer who did “Disco Inferno.” Again, I always love Cher’s techno-live duet with Sonny –- very moving every time for those of us who were never able to see them perform together. And I feel people don't give her Elvis impersonation (as seen in her “Walking in Memphis" video) enuff ink. She almost disappears into it. And Cher’s big presence disappearing into anything—come on people.

Really, the only things I could fault with the show today are, aside from its neverchanging setlist, some of the humor bits: the teamsters joke isn't funny enough and it goes on far too long. In a way, that’s reminiscent of lazy-flowing 70s stand-up bits but this one never quite pays off.

And the "Cher falls off deathmobile machine and kills 20 nameless audience members" headline joke did NOT play well with the bf.

There’s been controversy about the sailor hats. Cher slipped on a hat a ways back. There was an announcement in the beginning that nothing should be thrown on stage. People threw about three things up anyway (including a penny???). Cher didn't sound thrilled about the breach, but no security kicked them the hats off and she did pick up one to skip around with during "Turn Back Time" as is customary.  A week later, allegedly we are back to no hats again.

I think the hats are understandably dangerous. And yet a customary fan-connect moment is really appreciated. Neil Diamond has the sing-along with "Sweet Caroline" (dunt, dunt, dunt!), Barry Manilow has the duet with a random fan for “I Can’t Smile Without You” and Jimmy Buffet has...well pretty much his whole show is fan-participation. Maybe something new and safe could be invented for Cher’s future shows.

As for the Cher store, the programs have not changed over to Volume II and most of the merchandise is still the same. A few new items include a new shelf of Sonny & Cher stuff shaped like TVs: a small (very small) ring box, a Christmas tree ornament and most awesomely, a cookie jar which my bf talked me into buying because it was ultimate fan kitsch.

However, Bette is still staying ahead of the curve. She’s added bath products! Bath products! How perfect is that?  It fits so well with Bette’s bathhouse past sure...but Cher had a beauty product line! Imagine Cher bubble bath?? 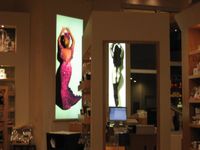 Bf also scored points for noticing the dueling Bette v. Cher posters. If you stand by the cash register a certain way, you can see them side by side as pictured. Bette is doing a send-up of Cher’s famous butt shot by Herb Ritts. Has this always been there?

The first time I dragged my bf to Cher in Vegas, I had to appease him by touring the Hoover Dam, worth seeing just for the lovely drive to it, not to mention the marvel that is the dam itself, with its art deco styling and giNORmousness.

This year, we topped that by going north to the state park The Valley of Fire which is one of the most breath-taking state parks I’ve ever seen. Amazing displays of rock everywhere you look. Here are some of my pics - click to enlarge:

I want to LIVE in The Valley Of Fire. Great pics!